UVA light – the main ultraviolet rays emitted by the tanning apparatus – had mainly been blamed for wrinkles and other signs of ageing.

But British research has now implicated it in causing cancer. 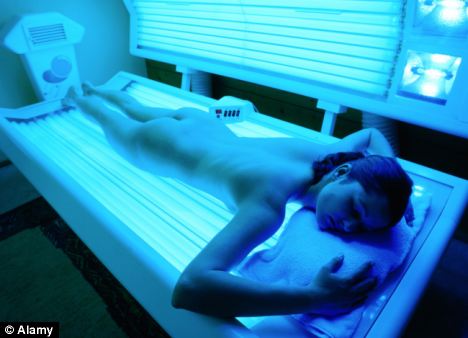 Exposed: Sunbeds mainly emit the dangerous UVA rays
Antony Young, an expert in the effect of sunlight on the skin, spoke out after studying the damage two types of ultraviolet rays – A (longwave) and B (shortwave) – caused to the skin of healthy young men and women.

‘Tanning salons still tend to claim that UVA is safe but that’s nonsense,’ he said, adding that it ‘may be more carcinogenic than previously thought’.

The researcher, of King’s College London, also warned that it is not just the midday sun that is dangerous, with UVA levels still high in the morning and in the late afternoon.

Even motorists are at risk, because UVA penetrates glass.

Professor Young shone UV light on the skin of 12 young Britons, then took samples and checked them for potentially cancerous damage.

This showed that UVB, the type of radiation usually blamed for skin tumours, mainly damages the top layer of the skin.

However, the outer cells are renewed and replaced every four weeks or so.

In contrast, UVA, which is associated with wrinkles, did more harm deeper down. Some of the cells damaged by UVA grow and divide very quickly and if they are damaged, the risk of cancer is higher.

OUT IN THE MIDDAY SUN
It is not just the midday sun that is dangerous.

Levels of UVA are still high in the early morning and late afternoon – meaning people should protect themselves against the sun all day.

Sunscreens do contain protection against UVA but most people do not put on nearly enough lotion, said Professor Young.

Motorists are also at risk, as while glass blocks UVB, almost all the UVA gets through.

Professor Young said: ‘Motorists should be putting on suncream or covering up by wearing long sleeves.’

‘Most people only apply a third to half the amount they need – make sure you’re not one of them, especially if we have another autumn heat wave.’

‘UVB is still the most important ultraviolet light in terms of damage to DNA, but UVA has a significant contribution,’ he told the Journal of Investigative Dermatology.

The finding is particularly worrying because, unlike UVB light, UVA rarely burns the skin, leaving people unaware of the harm that is being caused.

Professor Michael Kimlin, an Australian expert in sun and health, said: ‘What the researchers are saying is that we may have been looking at the wrong wavelength of light for years.

‘People have been focusing attention at UVB as we know it contributes to sunburn – a known risk factor for the development of skin cancer.

‘We know that UVA causes premature skin ageing but the link between UVA and skin cancer has been tenuous.

‘What these researchers have found out is that UVA might actually contribute to skin cancer and that you don’t have to burn to be at risk.’

Professor Mark Birch-Machin, a Newcastle University skin scientist, said the research proves UVA to be ‘as much a bad boy of skin cancer’ as UVB. The warnings come amid concern about soaring rates of malignant melanoma, the most deadly form of skin cancer.

The World Health Organisation says sunbeds – which emit a small amount of UVB as well as the UVA – are as great a cancer risk as cigarettes.

An estimated three million Britons regularly use sunbeds, some of which have a UV output up to 15 times more intense than the midday sun on a Mediterranean beach.

This modern-day obsession of paying for ‘a healthy glow’ is partly blamed for the number of cases of the most dangerous form of skin cancer more than doubling in just 20 years.

Sunbed use by teenagers has been banned.

Jessica Harris, of Cancer Research UK, said: ‘It’s important for people to protect themselves from both types of UV rays.

‘You can do this by protecting yourself from strong sunlight with shade or clothing, or by using at least factor 15 sunscreen that also has high UVA protection, shown by four or five stars on the bottle.

‘Sunbeds can emit large amounts of UVA and, in some cases, the strength of these rays can be ten to 15 times higher than the midday sun.’

She added that the WHO already judges UVA and UVB rays to be equally dangerous.

But Gary Lipman, of the Sunbed Association – the industry body, said that Professor Young did not use sun lamps in his experiments and that natural sunlight contains far more UVA than sunbeds.

SOURCE: www.dailymail.co.uk
Editorial Message
This site contains materials from other clearly stated media sources for the purpose of discussion stimulation and content enrichment among our members only.
whatsonsanya.com does not necessarily endorse their views or the accuracy of their content. For copyright infringement issues please contact editor@whatsonsanya.com