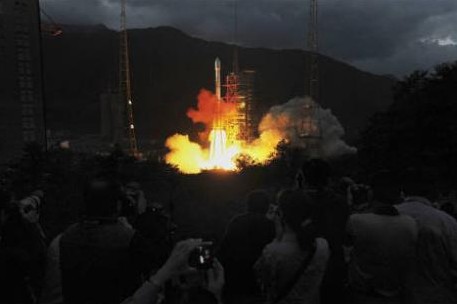 The launching of China’s 2nd moon orbiter Chang’e 2
China launched its second moon orbiter on Friday, marking the latest stage of the country’s space ambitions and ahead of a possible eventual manned mission to the moon.

Here are some facts about the Chang’e-2 orbiter and China’s lunar probe and space programmes:

— The Chang’e-2, named after a lunar goddess, blasted off from the Xichang Satellite Launch Centre in Sichuan province, more than 2,000 km (1,200 miles) southwest of Beijing, at 1059 GMT. It is expected to arrive in moon orbit by Oct. 5 for its six-month mission.

— It will test new technology and collect data for future landings of Chang’e-3 and Chang’e-4, and provide high-resolution photographs of landing areas for these following probes.

— The launch is the next step in China’s moon mission, to be followed by an unmanned moon landing and deployment of a moon rover planned for 2012 and the retrieval of lunar soil and stone samples around 2017.

Chinese scientists have talked of the possibility of sending a man to the moon after 2020.

— Chang’e-1 was launched in October 2007 and undertook a 16-month lunar orbit, taking detailed pictures and beaming back to earth 32 songs selected by the government and public, including the national anthem and Chinese pop diva Faye Wong’s rendition of a famous Song Dynasty poem about the moon.

— China started its space programme in the 1960s. In 2003, it became only the third country, after the United States and the former Soviet Union, to put a man into space. It sent two men into orbit in 2005 and carried out a space walk in 2008.

— China’s ambitions have caused concern of a space arms race with the United States and other powers since China blew up one of its own weather satellites with a ground-based missile in January 2007. China says its plans are purely peaceful.

— Chang’e-2 was put aloft by a Long March 3C rocket. Its successors are likely to be launched from a new site on the southern island of Hainan because next-generation Long March 5 rockets are too big for the railway tunnels in mountainous Sichuan, Chinese media have reported.

— Chang’e is a mythical Chinese goddess who was banished to the Earth with her husband for offending a heavenly emperor. Stealing an elixir for eternal life, she flew to the moon only to regret abandoning her husband and ending up sad and lonely.

— The Chang’e programme, formally approved in January 2004, has so far cost more than 2.3 billion yuan ($343.8 million). About 10,000 people have been involved in the mainly military-run project.

SOURCE: Reuters
Editorial Message
This site contains materials from other clearly stated media sources for the purpose of discussion stimulation and content enrichment among our members only.
whatsonsanya.com does not necessarily endorse their views or the accuracy of their content. For copyright infringement issues please contact editor@whatsonsanya.com