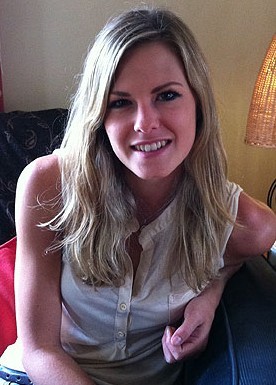 Georgie … ‘will I still have to work into my eighties?’
A 20-YEAR-OLD woman is three times more likely to reach the age of 100 than her grandparents, new figures reveal.

The increase in life expectancy is down down to better public health, nutrition and medicine.

But what is it like being 100? Here, Margaret Barker, 105, tells 20-year-old student Georgie Thomas what to expect – and Georgie gives her own thoughts.

Georgie is from Richmond, south-west London, and is studying economics at Leeds University. She says:
Being 100 definitely scares me. The freedom I have at my age is great and it frightens me I won’t be able to do things I can do now when I’m old.

I love going out dancing and running, I know when I am that old they won’t be possible.

One thing worrying me is being neglected. A lot of my loved ones would have passed away and I would be alone.

From a woman who is 100-plus, like Margaret, I would learn so much.

I also worry – with the way the economy is going – that I will have to work well into my eighties. With pensions being so uncertain I may have to work until I’m very old just so that I can have some money to live off.

But there are positives. It would be great to experience the world for so many years; I would learn so much and see so many amazing things.

Technology will develop loads. By the time I reach 100 new inventions and medical cures would have been developed.

Margaret … love modern inventions – like TV
MARGARET lives in an Anchor Trust care home in Scarborough, North Yorks. She says:
"I never expected to live to 105 – definitely not.
My husband Ernest passed away in 2003 and of course I still miss him. We were the best of friends.

But I still see a lot of my granddaughter Mandy and two great-grandchildren, so I’m not lonely. And I’ve got used to my own company.

Young people today will never have been without a TV but for me it’s still a fairly modern invention.

One of my favourite programmes is The Jeremy Kyle Show because it always gives me a laugh.

There was nothing like that when I was young.

I watch all the programmes using the subtitles because I now find it very difficult to hear.

It’s also important to have hobbies and interests at any age.

Girls born today who are lucky enough to live to 100 have so much to look forward to. I have some lovely, happy memories and I am very well looked after.

I’ve always done my best by working hard and I wouldn’t change anything. "

SOURCE: www.thesun.co.uk
Editorial Message
This site contains materials from other clearly stated media sources for the purpose of discussion stimulation and content enrichment among our members only.
whatsonsanya.com does not necessarily endorse their views or the accuracy of their content. For copyright infringement issues please contact editor@whatsonsanya.com

Next news: Hainan imposes restriction on hotel prices in its main tourist cities