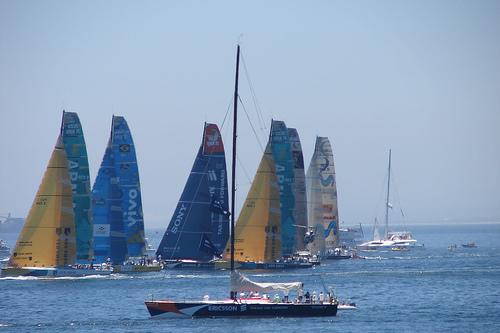 Putting sailing prowess and human ability to an exceptional test, the nine-month long Volvo Ocean Race is held every three years and set to take off this October. Called the most important and extreme offshore race in the world, those who take part know this is no pleasure cruise.

"What makes the Volvo Ocean Race so special is that it’s so extreme," New Zealander Mike Sanderson, 34, told USAToday. "You’re going through the Southern Ocean plowing through waves and around icebergs and there’s snow. Then eight days later you’re coming up the coast of Brazil, and it’s 90 degrees down below and you’re sweltering hot and you can’t cool down."

The 39,000 nautical mile race starts in Alicante, Spain in October 2011 and concludes in Galway, Ireland, during early July 2012, and will go through some of the world’s most treacherous seas via Cape Town, Abu Dhabi, Sanya, Auckland, around Cape Horn to Itajaí, Miami, Lisbon, and Lorient.

"The sailing you do in the Volvo Ocean Race is unparalleled," said Australian Justin Clougher, 39, bowman for Pirates of the Caribbean during the 2008-09 race, his second.

Sailing teams of 11 professional crew that include sailors with medical training, sail makers, engineers and members of the media will race day and night, sometimes for more than 20 days at a time on some legs of the adventure. Experiencing extremes in temperatures and living off of only freeze dried food, the race is designed to test the skill and endurance of all on board.

According to the current schedule, the race will make its only North American stop in Miami, Florida about a year from now on May 18, 2012. Gadling was on hand for the 2008-09 race as well as the 2005-06 run and will provide complete coverage of the world’s premier global race and one of the most demanding team sporting events in the world.

This year, the Volvo Ocean Race invites you to keep up with all the current news and information with a variety of social-friendly tools at the OceanRaceGame that feature all relevant information about the race, the game and the players.

SOURCE: Gadling
Editorial Message
This site contains materials from other clearly stated media sources for the purpose of discussion stimulation and content enrichment among our members only.
whatsonsanya.com does not necessarily endorse their views or the accuracy of their content. For copyright infringement issues please contact editor@whatsonsanya.com

Next news: Sanya speeds up construction of public toilets to improve tourism environment