Asian Cup Women’s Boxing Tournament to be held in Haikou 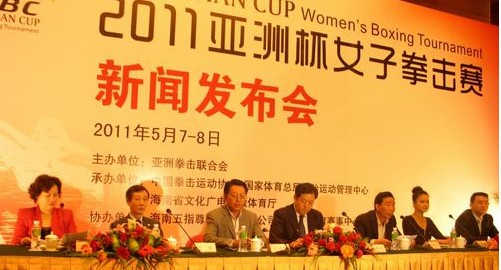 Veteran internationalists Alice Kate Aparri and Nesthy Petecio were given invitations by the Asian Boxing Confederation (ASBC) to compete against the region’s best boxers in the Asian Cup Women’s Boxing Tournament on May 7 to 8 in Haikou, China.

The ASBC invited the top Asian boxers in each division to compete in a "Final Four" format that offers a cash prize of $ 3,000 for the champion and $ 1,000 for the runner-up.

The event will serve as part of the Philippine team’s build-up for the 26th Southeast Asian Games in Palembang, Indonesia in November.

Aparri and Petecio, who are in the top 10 of the Amateur International Boxing Association (AIBA) rankings, are among the 40 boxers from 11 countries that are competing in the tournament.

Aparri, a 2009 Laos Southeast Asian Games gold medalist, is ranked fourth in the flyweight division (48 kilograms), while Petecio (flyweight, 54kg) is at seventh.

Petecio is also the only other Asian in the AIBA rankings, next to No. 2 Hye Song Kim of South Korea.

Martinez, an Asian champion in 2001, said Aparri’s and Petecio’s chances of winning in the five-day tournament have improved with the hiring of strength and conditioning coach Pio Solon, who performs the same job at the ALA Boxing Stable in Cebu.

With 2010 Asian Games silver medalist Annie Albania already retired, the women’s team will lean on Aparri and Petecio, among others, in the country’s quest for the elusive Olympic gold medal in the 2012 London Games.

SOURCE: GMA News
Editorial Message
This site contains materials from other clearly stated media sources for the purpose of discussion stimulation and content enrichment among our members only.
whatsonsanya.com does not necessarily endorse their views or the accuracy of their content. For copyright infringement issues please contact editor@whatsonsanya.com

Next news: Trace level of iodine-131 found on vegetables in Hainan province