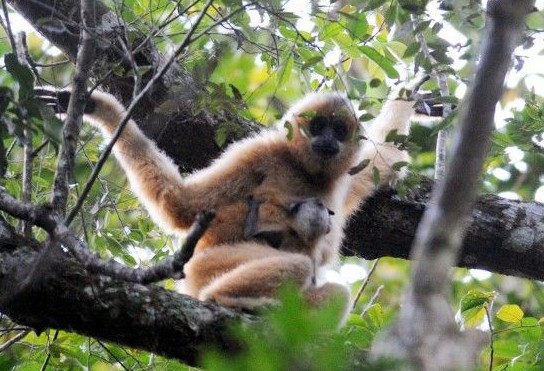 The Hainan Gibbons are the world’s rarest Gibbon
Crested Gibbons are the world’s least known-about apes, and they are also the world’s most endangered apes. Renowned Gibbon expert Thomas Geissmann has called for ‘urgent action’ to save the seven species of Crested Gibbon.
Geissmann called for action during the XXIII Congress of the International Primatological Society, held in Kyoto according to a press release issued September 17 by Flora & Fauna International. Geissmann said “The crested gibbons are the most threatened group of primates and all species require urgent attention to save them from extinction."
During the conference, Geissmann pointed to the world’s rarest Gibbon, the Hainan. Currently there are thought to be only 20 of the Hainan Gibbons remaining, living in two groups on Hainan Island, China.
However, there are seven species of crested gibbons, and all are "highly threatened, and some are among the world’s most endangered mammals" said Flora & Fauna International.

One of those endangered Crested Gibbon species was only recently identified by German Scientists. Scientists from the German Primate Center recently announced their discovery reported AFP. The Germans said this new species is just as endangered as the other six, and attribute the fragile status of the apes to human predation. Gibbons are favoured as food and pets, and are also killed to make traditional medicines.

The German Primate Center has already named the newly discovered species the northern buffed-cheeked gibbon, or Nomascus annamensis. A press release from the Center states the ape was distinguished as a new species because of its vocalizations.
Crested Gibbons are found only in Cambodia, Lao PDR, Vietnam and China. The monogamous apes are difficult to study as they live in tree tops in the mountain jungles of eastern Asia.
At least two species of Crested Gibbon are at less risk of extinction, but scientists call for increased funding to help protect all species, as well as study the little known ape. Another species, closely related to the Chinese Hainan Gibbon, the Cao Vit, has remained stable at around 100 individuals after Flora & Fauna International persuaded Vietnam to establish a Cao Vit Conservation Area. China recently designated the forest abutting the Vietnamese conservation area as a nature reserve.
Gibbons, like Gorillas, Orangutans, Bonobos and Chimpanzees, are also very closely related
SOURCE: Digital Journal

Next news: Room prices pegged for Sanya hotels in the upcoming National Holiday