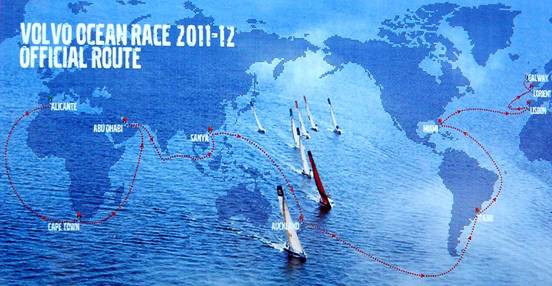 The event begins in October in Alicante, Spain, and ends in Galway, Ireland, in June next year. The eight stopovers in between are: Cape Town, Abu Dhabi, Sanya (China), Auckland, Itaja’ (Brazil), Miami, Lisbon and Lorient (France).

Skipper Ken Read has amassed 10 of the most elite off-shore sailors from across the globe to compete in the "Mount Everest of sailing," a 39,000 nautical mile ocean race stopping in ten ports of call over the course of nine months.

The team is currently training aboard George David’s and Alex Jackson’s 100′ Maxi Rambler100, which most recently broke the Caribbean 600 course record. The new PUMA Volvo Open 70 racing boat comes out of the shed in early spring.

Once the new boat is launched, the crew will bring the boat to Miami for on and offshore training.

In July, Read and his crew will participate in the Transatlantic Race beginning in Newport, Rhode Island, and finishing in Plymouth, England. The training programme will finish when the boat is brought to Alicante, Spain, in October for the race start.

"The decisions we make now are the ones that will create success or failure in this race, and having this team of veterans involved early certainly increases our chances to make proper decisions," said Read of the team assembled so far.

SOURCE: www.gulf-daily-news.com
Editorial Message
This site contains materials from other clearly stated media sources for the purpose of discussion stimulation and content enrichment among our members only.
whatsonsanya.com does not necessarily endorse their views or the accuracy of their content. For copyright infringement issues please contact editor@whatsonsanya.com

Next news: Seismic observation station to be built in eastern part of Sanya