Hainan on its way to a lucrative surfing destination 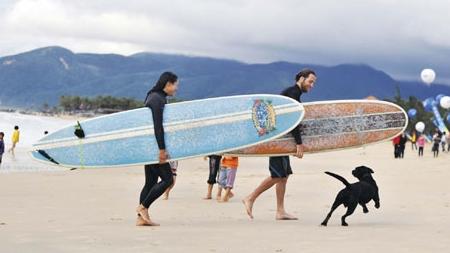 Surfing in Chinese areas like the island province of Hainan is still in its infancy despite the country producing much of the world’s surfing equipment.
Surf’s not always up but is getting there as Sanya tries to ride the wave

Surfboarding dogs may be a unique selling point for Hainan’s embryonic surfing industry, but life’s no Endless Summer for Brendan Sheridan as he struggles to turn the tropical island into a profitable surfing safari.

The Californian set up the first surfing rental shop in the Chinese tropics four years ago, but has still not broken even.

In a bid to drum up support, he co-organized a recent tournament headlined by four or five pro surfers from Australia and Robert "Wingnut" Weaver, star of the cult movie Endless Summer II.

Hainan enjoys a typhoon season from July through October that delivers to its small surfing contingent an early Christmas present in the form of large swells and occasional barrel waves.

"There’s a few days when it’s tested my limits," says Sheridan, who charges his clients 350 yuan for a two-hour lesson. He says 70 percent of them are non-Chinese.

The island, which is buffered from the full brunt of the South China Sea, can never hope to compete with the Antarctic swells that pummel the Indonesian surfing Mecca of Bali, but it also lacks the sharks and territorial tensions that spell danger in surfing hot spots like Australia and South Africa.

"The great thing about Hainan is that it’s empty," says Sheridan. "There are spots in California where you get mobbed, but this place is still relatively undiscovered.

"The proximity to an international airport is also good. You can literally land and be in the water in two hours."

For him, the shark-infested waters lie not beyond the white sands of Riyuewan (Sun Moon Bay), but right next door in the same shopping mall. In typically Chinese style, a local competitor called China Surf Sanya has just set up shop in the adjacent lot.

"I’m not worried about them poaching any of my business," says Sheridan. "I mean, who opens up a bar in a deserted parking lot?"

Hainan offers warm water but few barrel waves, and lacks the kind of cool surfing culture that could attract people from overseas. There are no full-moon beach parties, or people running around in Hawaiian shirts draining beer kegs through a straw, and the industry doesn’t appear to have moved on much since Santa Cruz Surfboards organized what it claims to be the first-ever surf event in coastal China there back in 2008.

Ironically, notes Sheridan, surfing is still in its infancy despite China producing much of the world’s surf gear, including boards and equipment for top brands like Billabong.

However Hainan’s surfers, who include about 200 Russians and half as many non-Chinese, welcome a handful more locals into their fold each year, says Matt Hammond, architect of the website Sanyasurf.com.

"Now we see local fishermen jumping on boards when they’re done fishing for crabs in rock pools," he says.

"Unfortunately, what this gives rise to is a safety issue, as you suddenly have a bunch of people in the water who don’t know what they’re doing, and have no clue about surfing etiquette."

One of the best-known Chinese surfers in the area is Zhang Yinhai, who goes by the moniker Dahai (Big Sea). He recently relocated to a barren location on the western coast of the island to start a surfing hotel.

The Harbin local, from China’s frozen northeast, expects his countrymen to ultimately warm to the sport, much as he did.

"I can never go back because I am hooked on surfing," says Zhang, who taught his Labrador Dan Dan how to ride a board backwards.

"If I have sons, they will surf too – definitely!"

Tianjin local Lu Yanfei, 36, says it is just a matter of promoting the sport on the mainland to a potential customer base of millions.

"I would have come earlier, but I didn’t know about it," says Lu, who was shelling out 2,800 yuan on one of Sheridan’s boards during his second surfing trip to the island earlier this month.

"There’s no way it can’t get bigger as word of mouth spreads, because this is China," he says, pointing to the friend he brought with him this year.

The island’s various surfing spots used to belong almost exclusively to a smattering of Japanese trailblazers, who would jump in the water in between work projects or golf games, but Chinese are reclaiming the island with each passing year.

In the next decade or so, right between when the industry develops and it gets out of control, surfers can expect better access to supreme conditions, says Hammond.

"I’ve seen waves over at islands I couldn’t get a boat to that were definitely double overhead (10-12 feet high)," he says.

"A big problem here is access. A lot of the spots we hit are on fish farms – that’s how remote they are. I’ve driven to spots so far out, I couldn’t even find the way home."

Next news: Hainan to offer tax refund at 11% to overseas tourists in 2011