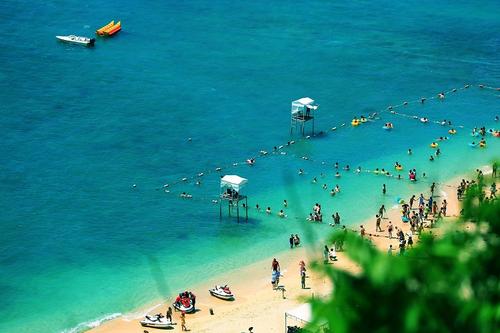 Popular Hainan is likely to expect a further boost to its growing tourism trade thanks to the formation of the Hainan International Tourism Alliance (HITA) and Hainan Tourism Development Commission (HTDC) in Sydney.

The opening of their first international headquarters will see the bodies play a key role in the promotion of Hainan globally, the destination already recording strong growth.

'We hope that these new bodies will help establish Hainan as a world leader in tourism,' HITA and HTDC local director Michael Lee said.

With the first branch of the newly established HITA and the recent opening of the HTDC and Sanya Tourism Development Commission all in Sydney, Australia is set to be the first Western country to 'reap the benefits of this massive undertaking'.

Monkey playing in fresh Hainan waters.
Mr Lee also announced the first annual Hainan Tourism Summit in Sydney and Melbourne, set for 23 November, and the November release of the first definitive 'Guide to Hainan', lifting the profile of the destination in Australia.

Charter flights between Sydney and Sanya, the Island's tourism capital, are set to begin in early 2011, further helping travel between the two destinations.

To aid travellers and their travel agents HITA is 'looking to unify the travel experience in Hainan for all visitors', with the Hainan Quality Assurance Program which will involve assessing and certifying hotels, tours, parks, restaurants and other tourist amenities.

Over the last year Hainan, dubbed the Hawaii of the Far East, posted a ten per cent increase in visitor traffic with growth set to continue as the Island prepares for 'ambitious' tourism expansion.

Among the projects Hainan has in development are two seven-star hotels, a high-speed rail network, the world’s largest duty free shopping zone and the Island’s first eco-tourism centre.

Hainan is also due to host a number of major events including the 2011 International Golf Show.

'Hainan's future looks as bright as its sparkling coastline.'

SOURCE: etravelblackboard.com
Editorial Message
This site contains materials from other clearly stated media sources for the purpose of discussion stimulation and content enrichment among our members only.
whatsonsanya.com does not necessarily endorse their views or the accuracy of their content. For copyright infringement issues please contact editor@whatsonsanya.com