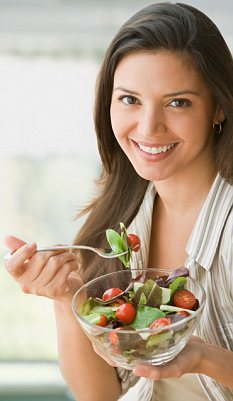 Mixing it up: Combining healthy foods can have a beneficial cumulative effect
Combining a wide variety of foods from porridge oats to blueberries is the key to a long and healthy life, a study has found.
Researchers from Lund University in Sweden looked at the effect that eating a number of anti-inflammatory boosting foods could have on the body, rather than testing them separately.
They found that such a diet could reduce cholesterol -an indicator of heart disease – by a third and also brought blood pressure down by eight per cent.
This suggested there was a beneficial cumulative effect in a wide-ranging diet and requires a lifestyle overhaul instead of making just a few changes to your cuisine.
‘The results have exceeded our expectations. I would like to claim that there has been no previous study with similar effects on healthy subjects’, said study author Professor Inger Björck, head of the University’s Antidiabetic Food Centre.
It has long been known that a healthy diet protects you against a range of diseases such as heart problems and cancer. Anti-oxidant rich fruit and vegetables, nuts, oily fish and whole grains have all been highlighted in previous research.
However, the latest study suggests that varied meals had a great impact than adding single foods.
Professor Björck said it was not possible to tell which foods had the greatest positive effect.
‘That’s the point,’ she said.
‘We believe in the idea of combined effects. Drug or specific products with health claims affect only one or maybe a couple of risk factors.
‘By a combination of food you can in a simple and striking way affect many risk parameters simultaneously.’
The study was based on 44 healthy but overweight people aged between 50 and 75 years old.

Breakfast: Porridge with blueberries and a sprinkling of cinnamon.
Snack: Handful of almonds and raisins
Lunch: Soya bean salad and a slice of wholegrain bread
Snack: Fruit salad
Dinner: Poached salmon with vegetables and brown rice risotto
Over four weeks they ate foods which are presumed to reduce low-grade inflammation in the body, a condition that triggers metabolic syndrome and thus obesity, type 2 diabetes and cardiovascular disease.
The test diet was high in antioxidants, low-GI foods (slow release carbohydrates), omega fatty acids, wholegrain products, probiotics and viscous dietary fibre.
Examples of foods eaten were oily fish, barley, soy protein, blueberries, almonds, cinnamon, vinegar and a certain type of wholegrain bread.
The results showed bad cholesterol was reduced by 33 per cent, blood lipids (fats) were down by 14 per cent and a risk marker fo blood clots by 26 per cent.
A marker of inflammation in the body was also greatly reduced, while memory and cognitive function were improved.
Professor Björck said: ‘We hope that these results on healthy subjects will inspire more preventative efforts in society.’
Inflammation is believed to be a key cause for chronic diseases and can cause cells to turn cancerous.
Cancer kills one in five men and one in seven women, while heart disease kills more than 110,000 people in England every year.
SOURCE: dailymail.co.uk
Editorial Message
This site contains materials from other clearly stated media sources for the purpose of discussion stimulation and content enrichment among our members only.
whatsonsanya.com does not necessarily endorse their views or the accuracy of their content. For copyright infringement issues please contact editor@whatsonsanya.com

Next news: Sanya expected to escape from the severe impact of typhoon Megi