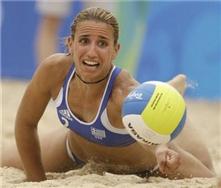 The wait is finally over and the SWATCH FIVB World Tour resumes after an eight-week break, which provided a chance to the players to spend time with their families. Now, the sensation returns to the beaches again and the SWATCH FIVB makes a stop in Asia.

The Sanya Open Tournament is the second last event on SWATCH FIVB World Tour Calendar. The Chinese city Sanya will be hosting this extreme fun-packed tournament for women. The campaign will officially start on October 26 and it will go on till 31st October, 2010. It will be followed by the Phuket Thailand Open Championship, which put an end to the 2010 season. By the end of Sanya Open, the international circuit will have covered 17 flights in 14 different countries over an eight-month period in 2010 with $6.83m awarded in prize money.

This time around, the SWATCH FIVB has invited 82 teams from 30 countries to show their game-skills and try their luck in the Sanya Open Championship in China. It is the third straight season that beautiful beach of Sanya is going to stage wonderful performance by the international players. The award money of US$190, 000 will be offered to the winner of this championship. So the aspiring teams are desperately waiting for the opening dates of this event.

The women’s last event on the SWATCH FIVB World Tour ended in August and the pair of Brazilian Juliana Felisberta Silva and Larissa Franca topped the podium with maximum points. At the end of August the top-10 women rankings are as followed:

The up-coming Sanya Open Tournament will provide a fair chance to the teams to earn better status. The gold-medal teams from the earlier two events held in Sanya will head the tournament. Jen Kessy-Boss/April Ross of USA and Simone Kuhn/Nadine Zumkehr of Switzerland have bagged gold-medals in the previous tournaments. In the first tournament in 2008, American duo outclassed Ying Huang and Xi Zhang from China in the final showdown. Similarly next year, Simone/Nadine clinched gold-ware by posting amazing victory over American Jen Kessy and April Ross.

The Sanya Open Championship is the 17th event on SWATCH FIVB World Tour Calendar. In this incredible campaign, Brazil will compete with top-seeded Juliana/Larissa, the duo which has collected the maximum number of gold-medals in this season. The attention will be focused on Juliana and Larissa as they always display a prolific performance and entertain the fans with their amazing tactics. In addition, the pair of Maria Antonelli and Talita Antues from Brazil is likely to create a lot of buzz in the championship. Maria/Talita also have good reputation and currently hold the second spot world ranking.

The host nation China will bring on Chen Xue and Xi Zhang to secure the title their own country. They are enjoying a very good form and they will also have the advantage of playing on the familiar sands. USA also appears as the best competitor in every beach volleyball campaign. Jen Kessy and April Ross have brought enough honour to country in the previous games. Americans will be heavily relying on this pair.

During the 2010 season, Brazil has collected six gold-medals; China has seized two, while USA also has earned six gold medals.

SOURCE: better.com
Editorial Message
This site contains materials from other clearly stated media sources for the purpose of discussion stimulation and content enrichment among our members only.
whatsonsanya.com does not necessarily endorse their views or the accuracy of their content. For copyright infringement issues please contact editor@whatsonsanya.com