Living under flight path increases the chances of heart attack 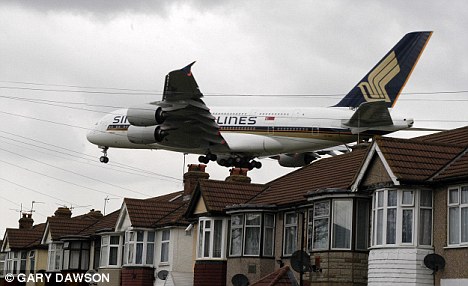 Aircraft noise is intermittent and can temporarily soar above 100 decibals if you’re close to one taking off or landing
Living under a flight path increases the chances of a fatal heart attack for nearly a quarter of a million Britons, a study suggests.

Scientists say the constant noise from roaring aircraft engines increases the risk by at least 30 per cent.

Researchers are unsure why noisy planes are so dangerous – but believe they raise stress levels, disrupt sleep and trigger high blood pressure.

The risk is highest for the estimated 240,000 Britons who, according to the EU, have to put up with an average daily noise of 60 decibels from noisy jumbo jets – the equivalent of a crowded, noisy bar.

The risk to Britons has been highlighted as a result of a study of 4.6million people in Switzerland. Researcher Dr Matthias Egger, of the University of Bern, said: ‘The effect was especially evident for people who were exposed to really high levels of noise, and was dependent on how long those people had lived in the noisy place.’

This isn’t the first time that living close to airports has been linked to negative health effects, including heart problems.

But the latest study reveals that the sound of the planes – and not just the air pollution from engines – is potentially deadly.

Using detailed information from an ongoing study called the Swiss National Cohort, Dr Egger and his colleagues identified 15,532 heart attack deaths among Swiss residents between late 2000 and the end of 2005.

The researchers were able to work out the aircraft noise and air quality for each person over 15 years or longer.

Those exposed to a daily average of at least 60 decibels of noise had a 30 per cent greater risk of dying from a heart attack than those exposed to less than 45 decibels, the researchers report in the journal Epidemiology.

Among those exposed to the higher decibel levels for 15 or more years, the risk was 50 per cent higher.

Night-shift workers could be raising their risk of cancer by disrupting their body clock over a long period, according to a study by scientists from universities in the U.S. and Germany.

Next news: Canteens to be set up in 6 star-rated public toilets in Sanya Bay