Updated: 2010-09-30 00:00:00
At one time, to be a scuba diver it required a certain expertise in swimming, relatively decent physical conditioning of the student and a lot of money.

Much to the chagrin of companies such as: NAUI, PADI, etc. who have strived for years to make SCUBA diving a safe sport, the entrance requirements for a beginner are, now, much less stringent.

I will concede that the sport is not as dangerous as it once was. Mainly because of modern communications, beginners are more aware of the hazards in and out of the water At least I haven’t heard, lately of anyone trying to swim with make shift weight belts, that don’t have a quick release, or mini air tanks converted from fire extinguishers or other such containers.

During the days of my youth such happenings, though not a daily occurrence, were not unheard of.

One time I found a large pressure cylinder that I thought would make a good SCUBA tank. As tanks were, and are, expensive I thought I would empty this one, change the valve and, viola, save some money.

When I hit the release valve, the tank flew backwards, out of my grasp, ripping the skin from one hand. It landed on its side, between my legs and proceeded to disgorge its contents, a white fire extinguishing powder, in an upwards direction.

By the time I was able to move away I looked like frosty the snowman.

Over the years the general populace has become more aware of diving, its benefits, and its enjoyment.

Travel has become more common and large resorts have become more available. Though you may not achieve a NAUI, OR PADI, certification you can receive a ticket, with only a few hours training, that will allow you to rent equipment from the resort you are staying at.

The Chinese, with their ability to mass produce, have carried training one step further. Assembly line SCUBA, at an affordable price.

Nearly, the entire peninsula is surrounded by coral reefs which come under the Hainan Sanya Natural Coral Reef Nature Reserve.

The reserve, whish is responsible for the protection of the only coral reefs within the P. R. (Peoples Republic of) China, has achieved gratifying results in: coral ecosystem recovery; public awareness; environment education; research; and eco-travel activities, of the reefs.

These pictures were taken, mid December, `03. The temperature was, approximately 26 Celsius. 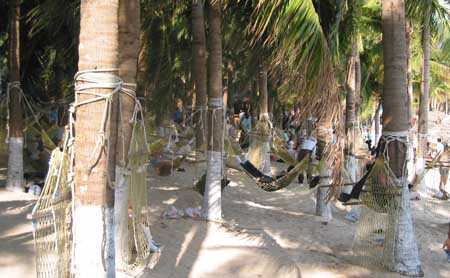 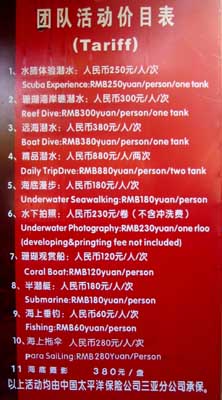 Close to shore, the swimmers and the waves have the sandy bottom so stirred up, I left my mask and snorkel in my bag.

I didn’t stay in the water for very long as it was a little too chilly for me. As well it was getting late in the afternoon and the breeze was getting cool.

These pictures were taken late in the afternoon and the groups were not as large as they were earlier in the day.

Throughout the day there is a steady stream of boats; leaving from, and arriving at, the wharves.

Dive area
The fore area is open to the public.
Behind this, students gather about an instructor aboard a float.
In the distance boats load, and unload, divers at the reef.

China’s tropical Paradise
The island of Hainan is approximately the same latitude (20 Degrees North) as Punta Cana (Dominican Republic) and reminds me of the beaches of Mexico.

The water, the South China Sea, was a little chillier than what I had found in Mexico, but it was the middle of December.

The entire experience, from paying at the gate, to removing your wetsuit, takes about one hour.

You won’t end up with a certificate that will be recognized around the world but you will learn whether or not you care for the beauties, and freedom, of life underwater.

We took a five day tour from Shanghai but Sanya is an international airport and you can get there from all most anywhere.

From my experience I would say, ‘don’t go without a guide’ as I never met anyone who could speak, or understand, English. However upon researching the internet I have found several tour companies that are based in English speaking countries. Maybe there are hotels and restaurants where you can get by with a language other than Chinese.

SOURCE: bearspage.info
Editorial Message
This site contains materials from other clearly stated media sources for the purpose of discussion stimulation and content enrichment among our members only.
whatsonsanya.com does not necessarily endorse their views or the accuracy of their content. For copyright infringement issues please contact editor@whatsonsanya.com

Next news: High room rates in Sanya lead to 30% drop in number of Shanghai tourists