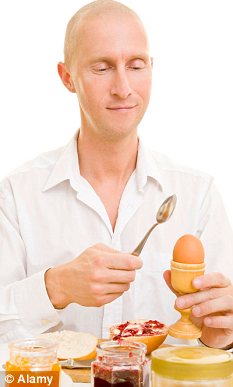 Three high-protein meals were found to stave off cravings most effectively in a new study
Sitting down to eat three meals a day may be a better strategy for weight loss than grazing on several smaller ‘mini-meals,’ according to a U.S. study.

Researchers from Purdue University in Indiana, found overweight and obese men on low-calorie, high-protein diets felt more satisfied and less hungry when they ate three times a day compared to when they ate six times a day.

There is a widespread perception that it’s better to eat little meals more often. However, lead researcher Dr Heather Leidy, now at The University of Missouri in Columbia, said: ‘These mini-meals everyone is talking about don’t seem to be as beneficial as far as appetite control.’

Studies on whether eating frequency affects appetite control have had ‘conflicting’ results, she and her colleagues note in the journal Obesity.

To investigate further, they randomly assigned 27 men who were overweight or obese to eat either a high-protein diet or a normal-protein diet for 12 weeks.

Diets contained 750 fewer calories than each man needed to maintain his current weight.

Starting at week seven of the study, the men either ate their assigned diet in three meals spaced five hours apart, or in six meals eaten every two hours, for three days in a row. The study participants then switched to the other eating pattern for an additional three consecutive days.

Men eating the higher protein diet (25 percent of total calories from protein) felt fuller throughout the day, didn’t want to eat as much late at night, and were less preoccupied with thoughts of food than the men who were consuming 14 per cent of their energy as protein.

While eating frequency didn’t influence appetite in the men on the normal-protein diet, the researchers did find that men in the high protein group felt fuller in the evening and late at night after eating just three meals a day.
It’s already been established, Dr Leidy said, that high protein diets are better for appetite control, although she added the diet followed was not Atkins.

‘We very clearly want people to know that this is not an Atkins-style diet. You’re still getting an adequate amount of fibre and fruits and vegetables with these diets.’