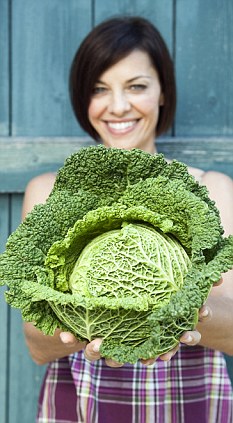 Home remedy: Warm or cold cabbage used on the skin can relieve PMS
Do you gargle with salt water to ease a sore throat? Or take a mug of hot milk to bed to help you sleep? Most of us have resorted to grandma’s home remedies at one point or another.

But these natural remedies may have some medical credence, according to a new book by Rob Hicks, a GP and hospital doctor.

Combining his medical knowledge with a long-standing interest in complementary medicine, he’s brought together the accepted, the intriguing and really quite bizarre self-help treatments for common ailments.

Despite the flimsy scientific backing, Dr Hicks says that many of these really do seem to have a positive effect.

‘And even if science hasn’t proved a remedy works, if it won’t harm you and you understand that positive effects may be due to placebo, they could be worth a try.’

Here, he outlines some of the most effective – and unusual – home remedies. These remedies should not be treated as a substitute for the medical advice of your own doctor.

TOMATOES: Two or three tomatoes a day may help prevent bad breath or halitosis. The problem is caused by foul-smelling sulphur compounds produced by bacteria which thrive in environments lacking oxygen, such as the back of the tongue.

YOGHURT: Eat a small pot of yoghurt every day – the active bacteria may inhibit the odour-causing bacteria.

CARROTS: Chew raw carrots if you think your breath smells. Bad breath is often caused by rotting food particles stuck between the teeth. When you chew, this stimulates the production of saliva, which helps get rid of food particles. The carrot fibres also act like a toothbrush on teeth and gums.

VINEGAR: Soak a dressing in cooled vinegar and apply it for ten to 20 minutes. Bruises occur when a bump causes blood vessels to break and blood leaks under the skin, leading to swelling, discolouration and pain. Vinegar increases blood flow near the skin’s surface, which helps to dissipate the blood pooled in the bruised area.

ONIONS: Mix grated onion with a little salt and pack against the bruise, holding there for up to ten minutes at a time. Onions are a rich source of quercetin, a plant pigment thought to be anti – inflammatory. This, in turn, will reduce the swelling around your bruise.

RADISHES: To make a juice, blitz radishes in a food processor, then place in a muslin cloth and strain. After showering, pat the armpits and feet dry, then smear radish juice under each armpit, or on to the feet and in between the toes and allow to dry. Radishes are both anti-bacterial and anti-fungal.

BICARBONATE OF SODA: Dust it on to skin with a powder puff to neutralise and remove smells. Bicarbonate of soda absorbs sweat, liquid and other substances that contribute to embarrassing and pungent body odours. Works for sweaty feet, too.
CONSTIPATION

ALOE VERA: Drink as directed on the packet. The juice of this cactus-like plant contains chemicals called anthraquinone glycosides, which can help relieve constipation by stimulating the bowel.

CUCUMBER: Eat a quarter of a cucumber a day. It is a rich source of liquid and fibre, and has a mild laxative effect that helps overcome sluggish bowels.

THYME: Gargle cooled thyme tea (made by pouring boiling water over a handful of the herb and allow to cool). The heat helps release an active substance called thymol which is a powerful antiseptic. Gargle as necessary.

COCONUT OIL: Massage into the scalp and leave overnight, then rinse. Repeat as necessary. Many cases of dandruff are caused by fungal infection and coconut oil contains auric and caprylic acids, which have been found to have anti-viral and anti-fungal properties. 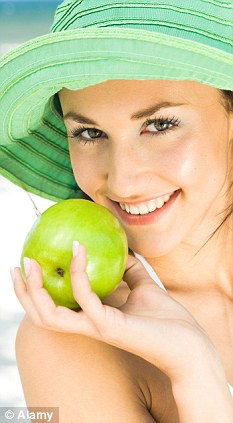 APPLE: Grate an unpeeled apple to the core, leave the grated bits on a plate for 15 to 20 minutes until it turns brown then eat. The pectin in apples firms the stool and reduces inflammation. The fruit also contains malic and tartaric acids, which regulate stomach acidity. Allowing the fruit to go brown means more of these compounds are available.

BROWN SUGAR: Drink a solution of one to two teaspoons of brown sugar in warm water. The molasses in brown sugar appears to have disinfectant properties that help kill infecting organisms.

TURMERIC: Mix together coconut oil with turmeric powder and gently apply to the affected area for up to five minutes at a time. This can be repeated two to three times a day. Turmeric contains a chemical called curcumin, which is believed to have anti-inflammatory and antioxidant properties.

The auric and caprylic acids in coconut oil may help tackle any bacteria which enter through the cracked skin.

TEA: Steep four tea bags in boiling water for ten minutes. Allow to cool, and then apply liquid to affected area using a cloth. The tannin in tea works as an astringent to reduce inflammation.

BASIL: Drink an infusion (a tea made by pouring boiling water on a handful of basil leaves) twice a day. The eugenol oil in the plant appears to block the effects of an enzyme called cyclooxygenase; this enzyme triggers inflammation and pain.

TONIC WATER: Drink up to a glass a day. The quinine in tonic water is thought to have anti-inflammatory and painkilling effects. Some people report a reduction in their symptoms of arthritis when drinking tonic water during flare-ups, and find that daily consumption helps keep symptoms at bay.

TURMERIC: Make a paste with boiling water and, when cool enough to handle, apply to the affected area, fixing in place with cling film, or a dressing and leave for 20-30 minutes twice a day. The spice has been used for centuries to treat minor skin injuries and the active ingredient, cucumin has anti-inflammatory effects.

CABBAGE: Relieve breast tenderness by placing chilled cabbage leaves straight from the fridge in your bra, or reduce lower abdominal pain by placing the leaves on the tummy. They will have the same effect as a cold compress. Alternatively, warm up the leaves by blanching in boiling water, running a hot iron over them, or putting them in a microwave, and apply.

ONION: Eat half an onion daily on the days leading up to your period. Hormones fluctuate during this time and chromium in onions is believed to have a balancing effect. Raw onion is best, as chromium content is reduced with cooking. The more pungent the onion flavour and smell, the greater its nutritional benefit.

GINGER AND BROWN SUGAR: Add fresh ginger and brown sugar to warm water and drink twice daily. Ginger is a natural painkiller and nutrients in brown sugar are said to tranquillise the nervous system and so also relieve pain.

CLOVES: Soak in a bath with a few drops of clove oil. The oil, which has natural pain-killing properties, will soak into skin, increasing circulation to loosen up muscles. Doctors in Germany have devised a quick-acting anaesthetic based on the plant.

ARNICA: Rinse the mouth with a few drops of arnica extract in warm water (don’t swallow). Arnica, a plant belonging to the sunflower family, has an anti-inflammatory effect and is available in pill or tincture form from health food shops

BAY LEAF: Boil a handful of bay leaves and mash into a poultice (a soft, moist mass). When cool enough, apply to the outside of the throat and leave for 30 minutes. No one knows why this old remedy works, but bay has anti-bacterial and anti-inflammatory properties and the warmth is soothing.

HORSERADISH: Grate a little horseradish and apply to the gums near the aching tooth. It contains a compound called synthetic allyl isothiocyanate which is used as a topical anaesthetic.

FIGS: Soak four figs in water, mash them, apply directly to the affected area and keep in place with a clean cloth. Leave for up to an hour. Gout is caused by a build-up of uric acid in the joints, and figs are alkaline, helping to counteract this. Morin, a compound found in figs, has been shown to reduce uric acid in rats.

LAVENDER: Make a compress – a dressing soaked in lavender infusion and left until the temperature is at a level tolerable to skin – and apply to the affected area until it cools. Lavender deadens pain and is anti-inflammatory and anti-rheumatic.

BANANAS: Mash ripe banana peel and place against the sore area of the head for up to 15 minutes at a time (repeat as often as needed). Headaches are caused by changes in the blood vessels. Bananas are high in magnesium, which may help to relax blood vessels.

ONIONS: Place a slice of raw onion on the back of the neck as a cold compress to relieve the neck strain that may be causing the headache.

Next news: Miss Tanzania Genevieve Mpangala to compete in Miss World 2010 in Sanya