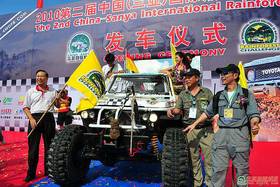 Prelude
Sanya, on the island of Hainan, is the southernmost city in China. It has a picturesque beachfront facing the South China Sea; however, it is also prone to the onslaught of the occasional typhoon. One month before the event, it was affected by the spillover of typhoon Conson. Three days before the event, it was affected by heavy downpours again. Even the scrutineering day on the eve of the event (17 Aug) was not spared, as rain swept through Longxing Seaview Hotel, which temporary stopped all outdoor activities for the first half of the day.

Meanwhile, over at the Prologue Special Stages (SS) site, an ongoing major operation to drain excess water from the obstacles with excavators was in full swing. There was no let up on the effort, even under the showers. However, worried faces were everywhere on whether the opening day would also be another wet affair.

18th Aug was bright, hot and sunny – what a relief! At Lu Hui Tou in downtown Sanya, a razzmatazz send off typical of the RFC was staged with big red balloons, stage, cannons, models and dancers. The upbeat mood really spruced up the opening ceremony which was attended by participants, officials and media from over 20 countries including UK, Italy, Switzerland, Spain, Hungary, Russia, Sri Lanka, Philippines, Singapore, New Zealand, Vietnam and Malaysia. The flagging off was graced by Mr Lin, the Secretary General of Sanya Govt and Sports Bureau officials.

For this second edition, ten foreign 4x4s were shipped over from only two last year. These are among the best Rainforest Challenge (RFC) experienced teams which also included the three−time champion of Team 117. The others, especially from West and East Malaysia and the Philippines all have equal chances for a good finish. The current champion of Team 121 was unfazed by the competition at that moment.

Among the Chinese teams assembled to take on the foreigners, the most serious contenders came from Guangzhou who is better prepared in hardware and off−road skills than the other local Chinese teams. But, nothing is to be taken for granted yet for the forty 4×4 warrior teams − the off−road battle ahead, the weather and the route would be unpredictable in this rainy season.

As the convoy reached the Prologue SS site, the rain returned but thankfully not for long this time. But, the days of deluge has already transformed the SS site into a soggy & muddy nightmare. Thus, nothing was going to be easy now, even for the best prepared teams in the water bogged terrain. Driving forward or backward is a big struggle. However, in spite of the difficulties, most of the teams were eager to test themselves in the quagmire.

The 6 SS of the day was a hard and tiring time for both the competitor teams and the marshalls handling the SS. As expected, in spite of the difficulties, the foreign teams did better than the local teams even thought some had to suffer mechanical problems in the process. By 7 pm, the last SS was closed, to be continued the next day. It has been a hard day’s work in this big struggle at the Prologue.

Bao Ting “Hilton.”
The Prologue SS continued to the second day. By then, only 25 teams were left still standing. By late afternoon, they proceeded through the picturesque route to campsite 1 situated in the Bao Ting Mountains on the outskirts of Sanya. It took a good three hours to reach this site which is surrounded by a fruit orchard and pristine flowing river. Many were camped on top of the only concrete building there, nicknamed “The Hilton.”
Mud & Leeches.
But the third day the campsite was hit by another rainstorm like no other, which drenched everyone and also made the tracks and the SS muddy, slippery and wet. Another 6 SS were staged which included winching and recovery exercise. But with the wet conditions, the going was tough and the SS further took its toll on the weaker vehicles.

If the wet and muddy conditions were not enough, the participants also had to contend with leeches of all shapes and sizes. These creepy crawlies even entered the “Hilton” which made everyone vigilant day and night to keep out these blood suckers. But, even with the rain, mud and leeches, it was all systems go for the teams and the marshals.

With such conditions and with anticipated rainfall to come, the fourth day 6 SS were cancelled. Instead, the order was given to move into the Twilight Zone one day earlier. If anything went wrong, at least they would have one extra day to regroup.

By then, only 13 teams were in good condition to tackle the challenges ahead while others had to backtrack from campsite 1 out to tarmac. 12 vehicles were divided into a group of 3, while the 13th vehicle was used as the scout vehicle.

The teams had to challenge uphill, downhill, slippery rocky surfaces, fallen trees, landslides, ruts, gullies and mud. They also had to keep the leeches away. This time, they seem to come from everywhere, even from the tree tops. The only consolation was that the rain had stopped.

But still there were lots of recovery wok as the teams struggled through. They must not leave any of their team−mates behind or they would not earn the 200 bonus points. Camaraderie was thickest here as they slogged out of the TZ. Camp II was a reserve campsite in the TZ just in case the participants needed it. By evening, all 13 teams and the marshals had passed campsite II and by nightfall, they all finally reached campsite III.

By the Rivers of Babylon

Campsite III is actually on a wide riverbed which is at the exit of the Twilight Zone and nearby rural villages. This regrouping day enabled those who have come out of the TZ to recuperate and also enabled the other injured teams to rejoin the main convoy. The magnificent view of the mountains and the crystal clear river flowing beside the campsite earned its namesake as the “By the Rivers of Babylon” campsite.

The second half of the day was back to action again under a hot clear sky. The 3 SS here were fought out with intensity especially among the leading contenders which has now narrowed down to team 117 and 129. Between these two, there was only 1 point of difference, so every SS counts and there is no margin for any error. The others in the contention were 120, 113 and the current champion 121.The action was hot in all the 3 SS of the day which included driving and winching among rocks, sand and mud.

The Surprise Birthday
The day ended with sweat and satisfaction for the top teams except team 121 which showed signs of engine and human fatigue, thus their scores further slid down the scale. That evening, team Land Rover Philippines made their way to the campsite without their beloved vehicle which was out of the contention by now due to engine breakdown. They were, however still in high spirits with the event, but Hilario @ Larry Mendiola got a surprise birthday cake and party sprang up for him that night. It really got everyone into a party mood ahead of the following night BBQ party night .But unknown to all, that was the only impromptu party time of the event, for the next day, Mother Nature decided the turn of events.

The morning briefing at Event HQ was straight to the point; the final 3 SS must be completed as soon as possible. A typhoon alert had been issued by the local authorities − be prepared for high winds and heavy rainfall. With that, the race was on to complete the SS and to pack up and return to Sanya. Those were the dramatic moments as the competitor teams fought out the SS in the unrelenting light rain throughout the day. The sky was overcast with dark clouds above while the action was hot below. The last SS also decided the fate of team 129, their front tyre came off the rim! With this DNF (did not finish), the course was clear for team 117 to stamp its mark as the newly crowned champion.

However, the event was not over yet, its evacuation time to get everyone back to the hotel. Under a gloomy dark sky, strong wind and heavy rain − it was a race to the finish line to Longxing Seaview Hotel. By evening, with bodies soaking wet, at last, the participants, media and officials reached their final destination, safe and sound. That night, a typhoon storm rocked and soaked Sanya to the core.

Thus ended the dramatic finale of this 2nd episode of China−Sanya RFC aka CIRFC 2010.At the prize giving night on 24 Aug, the air was thick with camaraderie as everyone not only celebrated their respective triumphs but also their own escape from the typhoon.

“This year’s episode is another record − for the most number of modified foreign 4x4s as well as bringing capable teams to compete. It also opened the eyes of the Chinese 4×4 enthusiasts on the proper hardware to upgrade as well as acquiring the right driving and recovery techniques This is part of the overall strategy to upgrade both Chinese hardware and off−road skills. And, of course, for a big bang opening and typhoon ending,” remarked Luis J.A.Wee, Founder of the RFC.

SOURCE: rainforest-challenge.com
Editorial Message
This site contains materials from other clearly stated media sources for the purpose of discussion stimulation and content enrichment among our members only.
whatsonsanya.com does not necessarily endorse their views or the accuracy of their content. For copyright infringement issues please contact editor@whatsonsanya.com