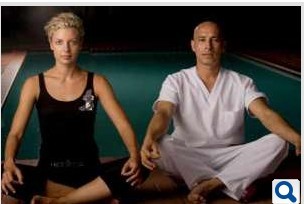 Yoga can help you shed that flab
Is your waistline bothering you in middle age? Try regular yoga, says a new study.

The study, led by researchers at Fred Hutchinson Cancer Research Centre ( FHCRC), is the first of its kind to measure the effects of yoga on weight.

The study involved 15,500 healthy, middle-aged men and women who were asked to complete a written survey recalling their physical activity (including yoga) and weight history between the ages 45 and 55.

The study measured the impact of yoga with weight change, independent of other factors such as diet or other types of physical activity.

The researchers found that between the ages of 45 and 55, most people gained about half a kg a year, which is a common pattern as people age and do not trim calorie intake to their declining energy needs.

"However, men and women who were of normal weight at age 45 and regularly practised yoga gained about three fewer pounds during that 10-year period than those who didn’t practise yoga," said FHCRC’s Alan R. Kristal, study co-author.

For the study, regular yoga practice was defined as practising at least 30 minutes once a week for four or more years.

"Men and women who were overweight and practised yoga lost about five pounds, while those who did not practise yoga gained about 14 pounds in that 10-year period," said Kristal, professor of epidemiology at the University of Washington School of Public Health ( WUSM).

What accounts for yoga’s apparent fat-fighting potential? Kristal, himself a long time yoga practitioner, suspects it has more to do with increased body awareness than the physical activity itself.

"During a very vigorous yoga practice you can burn enough calories to lose weight, but most people don’t practise that kind of yoga," he said.

"From my experience, I think it has to do with the way that yoga makes you more aware of your body. So when you’ve eaten enough food, you’re sensitive to the feeling of being full, and this makes it much easier to stop eating before you’ve eaten too much."

Study co-author Denise Benitez, owner of Seattle Yoga Arts, agrees. "Most people practise yoga in a way that’s not aerobic enough to burn a lot of calories, so it has to be some other reason."

These findings appeared in the August issue of Alternative Therapies in Health and Medicine.