2010 China Sports Tourism Expo to be held in Hainan December 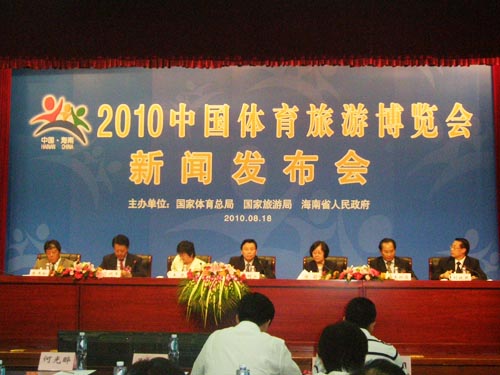 Press conference of the 2010 China Sports Tourism Expo
A national sports tourism expo will be held on China’s southernmost province Hainan in December, officials from the country’s General Administration of Sport said at a press conference on Wednesday.

Jointly initiated by the General Administration of Sport of China and the National Tourism Administration, the expo aims to integrate the country’s sports and tourism resources to advance the development of both industries.

This year’s expo will be held in two venues. The main venue will showcase different themes in various exhibition areas, such as Hainan international tourism island, the scenic spots of each province, and sports tourism gear and services. A second venue will be the site for various activities, including a forum on the development of the sports and tourism industries, a Beach Music Week and an international marathon.

Earlier this year, the Chinese government issued a plan to build the tropical island into a top international tourist destination. Since then, the total number of overnight tourists in Hainan has climbed 15.1 percent year on year to 13.24 million in the first half of this year, according to latest figures from the Hainan Provincial Tourism Bureau.

Organizers said they hope expo visitors from both home and abroad will have an unforgettable experience on the tropical island.

"Hainan will seize every chance to develop itself into an international tourism island, and its uniquely moist climate and rich ecological resources will be advantages for it to hold this expo," said Fan Xiaojun, Director of the Department of Culture, Radio, Television, Publication and Sports of Hainan Province.

Since its creation in 2007, the China Sports Tourism Expo has successfully established a way of rational consumption of sports and tourism among the Chinese and served as a platform to promote the country’s sports and tourism to the rest of the world.

The previous expos were held in Shanghai, Chengdu and Harbin.

The logo of the 2010 China Sports Tourism Expo.
Its main colors of red, blue, green and orange represent sunshine, sports, experience and environmental friendliness. The three people in red, orange and green represent a happy family. The blue wave represents boating, a popular sport in Hainan.
SOURCE: english.cri.cn
Editorial Message
This site contains materials from other clearly stated media sources for the purpose of discussion stimulation and content enrichment among our members only.
whatsonsanya.com does not necessarily endorse their views or the accuracy of their content. For copyright infringement issues please contact editor@whatsonsanya.com

Next news: 21yo Agata Szewioła to represent Poland in Miss World 2010 in Sanya