Sanya is an ideal spot for surfers

If it is not witnessed, you can hardly imagine that a wave across the curve would be so beautiful. This is the challenge of the sea, a game of struggling with sea, a most exciting water sports. Mercilessly swallowed by the sea, to stand up and be swallowed up again, then stand up again, so repeatedly, it is the practice of becoming stronger and firming your faith. Only the brave dare to press the button, only the brave dare to experience this water sport, only the brave will be standing up to wave and laugh last.

April is a good season for Sanya with lots of Sunshine, especially for water sports. Not far from Sanya Wuzhi Island, that is secluded Sanya Houhai, here have open horizon, mountains, green sea, blue sky, billowy waves. Which is sponsored by the Shanghai Extreme Sport Home, and Sanya Asefi Surf Club carries out surfing activities here. Looking at a group of surf-lovers step on sailboard, from time to time, they sidling baby, swinging, rotating, sliding … they are controlling the wave and try to conquer ocean. 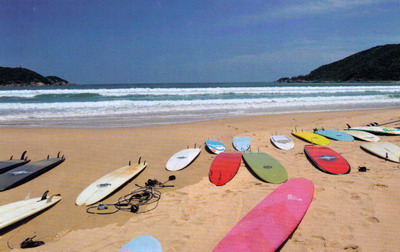 We got up early in that morning, and met with surfing warriors at Sanya Da Donghai Bay, then launched for Sanya Houhai’s surfing point. More than 20 persons participated in the surfing event, although those members in different complexion and speaking different languages, but they were for the same purpose. The wind in the morning was warm and soft. At nine o’clock in the morning, sunshine still shone on our face, and accompanied with us towards the east. The driver is the boss of Sanya Asefi Surf Club, called "Dahai". We were impressed a lot by his dressing, large black sunglasses, dark skin, bright shining cowboy necklace and a pair of big pants, seems so cynicism. Half an hour later, we arrived at entrance to Houhai. Got off and walked along the gravel, passed by rugged cluster of cacti, larger yellow flowers were on your side, around which butterflies were flying and stop by, suddenly touching was surge up. Continue your walk and through one pass, that is the surf points.

Ocean, sky, mountains and beach, our horizons suddenly sprung wide, sea breeze lasted and blew in satisfied. Between sky and beach, billows were on the scamper and sound like a growling lion. Members began to take props out cars, in a while, the golden beach was covered with lots of surfboard, and they were in different lengths and colors. "We use surfboard which are about 1.5 ~ 2.7 meters long, 60 centimeters wide, 7 to 10 centimeters thick", A-long, one of the member told us, "The board is slightly narrow at both ends of front and rear, the latter has a tail below, the main effect is stabilization. Surfboard is equipped with a rope to bind feet, making more secure for surfing." 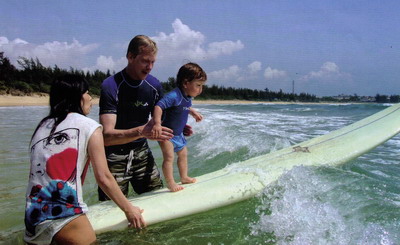 A-long is a surfing coach who came from California, United States. He led the members to set up two blue summerhouses on the beach, and then started to do all kinds of preparations. In order to increase the friction, they need to wipe a waxy coating on the surface; and then warmed-up, run on the beach, let muscle to sketch completely.

Time closed to noon, bright sun shine, the surfers’ passion was high. On the boundless sea, the waves came torrentially, brought the beautiful nature, and surfers’ heroic posture. They stood in the surfboard, used skills and balance to control the waves, lined out graceful curves. Board, people, waves, three-in-love, was the perfect harmony. I am a layman, but am deeply absorbed in, with envy. Chatting with A-bing who did the preparation on the beach, he said that "The origin of plate movement is surfing. Skiing board and water-skiing board are evolved from the surfboard. Smaller surfboard indicated that the skill is better, because small surfboard can make more actions." 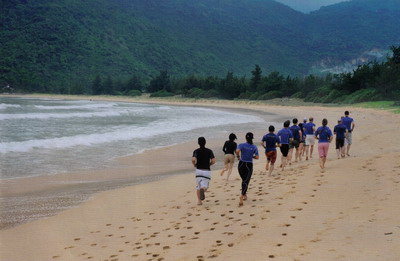 A-bing, a surfing enthusiast, made a special trip from Beijing to take part in the surfing. After a few minutes, he sailed again, in the boundless sea, he groveled prostrate on the surfboard, used hands to pull forward, compared with scene of the chatting with the buddy, and I am more admired for the beauty of staunchness of the tough guy at this moment. He crossed a few waves, pulled to a suitable place for the start point. He kept the surfboard in front of the top of waves while the waves pushing, then stood up, the feet falling out wards, bending knees, following the waves, rapidly sliding. After more than 30 seconds, he did a lot of water actions, graceful curves made me amazed and admired.

"This is a supernatural sport" A-bing said, "On the immobile sea; just a small board could conquer the waves, lined out the most beautiful curve. Every wave is living; all of this is a new experience. The success of surfing is really wonderful."

Members of the Surf Club were in very high spirits, till 9:00pm they left. "A crowd of beautiful girl and a classic wave, which will you choose?" When Dahai left, he said to me "For surfing enthusiasts, it’s not doubt to choose wave, even could not give a glance at the girl. The few seconds were become a classic and inexhaustible memory."

Tips of Surfing in Sanya
Wave is the big movement of sea which is caused by internal or external forces, such as gravities between stars, changes of air pressure and non-uniform seawater density. This movement turns to be a beautiful wave when it is getting close to the coast. Sanya is gifted with seven to eight places that are excellent for surfing in any season of year.

Notice of Surfing in Sanya
1. When your surfboard is sent back to the coast and the depth of water is about 30cm, please leave the surfboard immediately in case that is crashes against the rock.

2. In order not to hurt your hand, don’t try to get the string on the foot and board by hand when the surfboard is crashing against the wave.

3. During the competition, please keep a distance in twice length of the surfboard from one competitor to another.

4. If encounter an ocean current flow to outside sea, just inclined to follow the ocean current, grasp the waves, don’t throw away the safety rope to swimming back, please grovel in the surfboard, have a rest and waiting for the rescue.