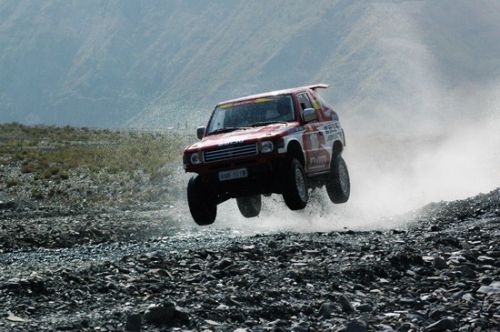 Sabahan four-wheel drive enthusiasts will be among a host of foreign participants aiming to claim honours at the Sanya International 4 x 4 Challenge in Sanya, Hainan in China, next month.

The event, which saw only two foreign cars competing at the inaugural challenge last year, promises to be an even bigger event this year with 14 foreign cars taking part.

Sabah will be among several Malaysian states that will be competing in this event, while Denmark, Austria and Australia are also expected to send their participants.

Sabah Team Manager, Daniel Liew, said the fully upgraded mean machines will be a thrill to watch and that participants, including foreign media, will be in for an exciting and thrilling adventure.

According to Liew, the one week event, which would be held from August 18-24, is being jointly organised by Rainforest Challenge International and the Sanya government.

"This event is aimed not only at promoting fellowship among four wheel drive enthusiasts throughout the world but is also aimed at fostering good relations between the governments of the participating countries," said Liew.

He said the Sanya government authorities would be inviting the Malaysian related Ministry to send representatives to participate in the event, which would make it a G-to-G affair.

Liew said that with the invitation in place, there would be a good chance that an official Malaysian authority would attend at least the Opening and Prologue Special Stages scheduled on August 18 and 19.

One thing worth mentioning about the event is China’s relatively new involvement in this sport.

"The Chinese teams and organisers learnt some valuable lessons from last year’s event and will have a bigger team this time round to go against the foreigners.

"One of the objectives of this event is to encourage the Chinese to upgrade and be more involved as they are considered late comers to this adventure sport," said Liew.

He added that as a measure to spruce things up at this year’s event, the Sanya government would make a warm welcome to suit this new international event for the island.

"They hope to make Hainan the centre of 4 x 4 in China in close collaboration with the RFC," said Liew.

The RFC Malaysian crew will also be expected in greater numbers than last year to help facilitate the event operations of the local organiser.

Liew said that the RFC, which is Malaysia’s homegrown event, has made it overseas with Asia’s giant (China).

"We hope that this event would reinforce yet another people-to-people relationship in the 4 x 4 sector, which will help cement Malaysia-China ties," said Liew, adding that this is a way for Malaysia to benefit from an emerging China economy.

He said that Malaysia’s participation in this event demonstrates the 1Malaysia concept in action in a foreign land, as Malaysian participants come from all over the country and comprise of various races and ethnic backgrounds.

Those interested to take part in this event can find more details at www.rainforest-challenge.com (under RFC China 2010).
SOURCE: dailyexpress.com.my
Editorial Message
This site contains materials from other clearly stated media sources for the purpose of discussion stimulation and content enrichment among our members only.
whatsonsanya.com does not necessarily endorse their views or the accuracy of their content. For copyright infringement issues please contact editor@whatsonsanya.com