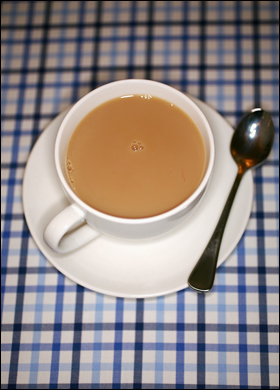 DRINKING six cups of tea a day may almost halve the risk of death from heart disease, research shows.

Those who drink between three and six cups are 45 per cent less likely to suffer coronary problems compared to people who had less than one cup daily, a study found.

And drinking more than six cups was associated with a 36 per cent lower risk of heart disease.

It was good news for coffee drinkers too, with the study saying that a modest intake – two to four cups a day – may lead to a 20 per cent lower risk of heart problems.

The benefits are said to be down to antioxidants, and flavanoids contained within tea, although the precise mechanisms are not understood.

She said: "While previous studies have shown that coffee and tea seem to reduce the risk of heart disease, evidence on stroke risk and the risk of death from heart disease was not conclusive.

"Our results found the benefits of drinking coffee and tea occur without increasing risk of stroke or death from all causes."

The study did not take into account the types of tea consumed, although in the Netherlands black tea accounts for 78 per cent of consumption and green tea 4.6 per cent.

The team, whose research is published in Arteriosclerosis, Thrombosis, and Vascular Biology: Journal of the American Heart Association, also noted that tea and coffee drinkers have different health behaviours – with more coffee drinkers prone to smoke and have a less healthy diet.

Next news: Hainan to become sister resort with Turkmenistan’s ‘Avaza’