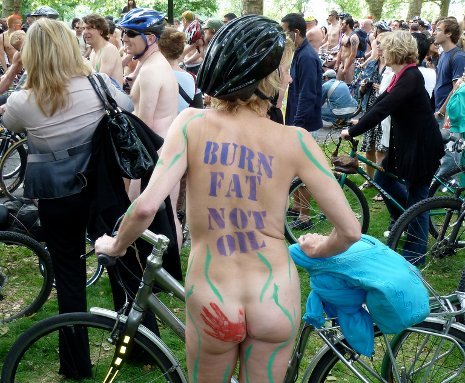 Hyde Park Corner, a breezy Saturday afternoon. Five girls stand in lacy knickers, steely gazes avoiding the ring of paparazzi and amateur camera phone perverts who surround them. They are rubbing Vaseline over their bodies and coating each other in glitter. The circle of voyeuristic vultures shifts slightly as they pick up their flower-covered bikes and proceed to the start line. Glinting in the midday sun, wearing nothing but a thick coating of glitter, these girls are luminous. And one of them, I’m surprised to announce, is me.

The World Naked Bike Ride is a protest against car culture and oil dependency. For the last seven years, cities across the globe have participated in this protest. All week I’ve been vaguely aware that I’ll be doing this, and when the day comes, indeed when the moment to unclothe arrives, I literally have to grit my teeth and ignore the crowds of men who are suddenly swarming. Stripping down in front of the cameras is not in my nature. Believe me.

I’m not an exhibitionist, but believe very passionately in taking to the streets to represent your beliefs. Practice what you preach. Living by example is the first step to an improved world. And cycling is what I believe in. Cruising past the congested London traffic around Trafalgar Square and the message seems obvious: pro-cycling, anti-car. That pedal power is a superior method to inner-city driving is unquestionable. The advantages are so obvious I needn’t list them. An added message is that cyclists are vulnerable on the streets of London and often not given respect or road-space by drivers.

Today, there are apparently 1,100 people on the ride in varying states of undress. The brave – and much respect to them – are completely naked. Others have messages daubed onto their bodies (‘Pedal Power’, ‘One Less Car’, ‘Burn Carbohydrates Not Hydrocarbons’, ‘Born Naked’, etc). There are some stunningly decorated individuals; two golden men on a tandem wearing antlers, a couple of zebras, one of them deftly swishing around on rollerblades, an environmentalist man painted entirely green. The issues are as multifarious as the body shapes. Reclaiming the streets, making cyclists more visible and demonstrating the most obvious alternative to car culture are the main ones. The issues are somewhat lost in the spectacle – the event would definitely benefit from more banners and messages – but the point is made, and the press surrounding the event is monumental.

Early on, while we are glittering up, we meet a chap who has been sent out by his wife to buy an iron. He is on a bicycle, and after politely asking if he can take our photos, we encourage him to strip off. Which he does. Our paths cross sporadically throughout the ride and again at the finish line, where he proudly replaces his jeans nine miles after they were first removed. “I can’t believe that I did it but I’m pleased I did – it was a fun combination of exuberance and exhibitionism. I certainly wouldn’t have done it without encouragement. I spent the first twenty minutes of the ride thinking ‘When can I stop to put my pants back on?’ and the next twenty minutes thinking ‘Look at me naked everyone…”

Riding naked through London was one of the most liberating experiences to date. The wind in your hair, the streets lined with people snapping thousands of photos and an amazing camaraderie amongst the cyclists. The unnerving moments arrive when I need to take a toilet stop and have to go into a pub, alone, while two guys follow me with camera phones. There are a few gratuitous pervs along to get an eyeful but in general people shout words of encouragement as we pass. And I feel privileged to be able to do something like this. Why not cycle through London naked? With only one life to experience all you can, why wouldn’t you? It is empowering and incredibly freeing. There is the overwhelming feeling that we can do anything as we sail past the Houses Of Parliament. I’d sooner be the one naked in the wind than standing on the sidelines any day.