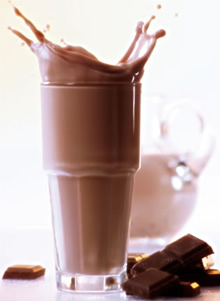 Chocolate milk may taste delicious but now researchers believe it may also be good for you after exercise.

The American College of Sports Medicine released a series of studies that showed drinking low-fat chocolate milk after a workout can help the body retain, replenish and rebuild muscle to help the body recover.

In one study, researchers took muscle biopsies from 8 men who were trained runners. They said it showed that after drinking 16 ounces of fat free chocolate milk, the runners’ muscles showed that they were better able to repair and rebuild, compared to when they drank a sports beverage with the same amount of calories. Researchers said the runners had better skeletal muscle protein synthesis.

Researchers also found that people who drank the fat free chocolate milk after working out had a greater concentration of glycogen or fuel in muscles 30 to 60 minutes after exercising. They also said it helped to decrease muscle breakdown compared to drinking a carbohydrate sports drink.

“It’s always helpful for exercisers to learn of additional options for recovery drinks,” said William Lunn, Ph.D. Lunn was one of the researchers on chocolate milk. “Chocolate milk can be relatively inexpensive compared to commercially available recovery drinks and is easy to make at home, making it a viable and palatable option for many people,” he said on American College of Sports Medicine website.

Studies suggest that chocolate milk has the right mix of carbs and protein to help refuel worked muscles and the protein in milk helps build lean muscle.

This site contains materials from other clearly stated media sources for the purpose of discussion stimulation and content enrichment among our members only.
whatsonxiamen.com does not necessarily endorse their views or the accuracy of their content. For copyright infringement issues please contact editor@whatsonxiasanya.com