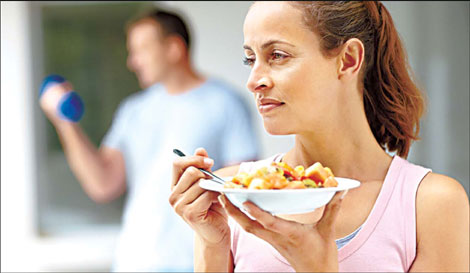 While some experts suggest that skipping pre-workout snacks may help you lose weight, others remain skeptical. Provided to China Daily

Running on empty may not be such a bad idea after all. Though many athletes eat before training, some scientists say that if you really want to get rid of more fat, you should skip the pre-workout snack.

Several studies suggest exercising while your body is low on food may be a good way to trim excess fat. In a recent paper, European researchers found that cyclists who trained without eating burned significantly more fat than those who ate.

Muscles usually get their energy from carbohydrates, which is why athletes like Lance Armstrong and Michael Phelps scarf down enormous amounts of food before a race. But if you haven’t eaten before exercising, your body doesn’t have many carbohydrates in reserve. That forces it to burn fat instead, scientists say.

"When you exercise (after fasting), your adrenalin is high and your insulin is low," says Peter Hespel, a professor of exercise physiology at the University of Leuven in Belgium. "That ratio is favorable for your muscles to oxidize (break down) more fatty acids."

Hespel says that people who don’t eat before exercise burn more fat than they would if they had grabbed a bite beforehand.

In a study published in April, researchers at the University of Birmingham and elsewhere assigned seven people to cycle three days a week, followed by an intense session an hour later without eating. Another seven people followed the same regime, without the instruction to fast.

Though members of the group that didn’t eat performed worse on the intensive training, they burned a higher proportion of fat to carbohydrates than the group that ate. The results were published by Medicine & Science in Sports & Exercise, the journal of the American College of Sports Medicine.

In a 2008 study, Hespel and colleagues tested the effects on men who did endurance training without eating versus those who ate. In the athletes who hadn’t eaten, the researchers found a spike in the amount of proteins needed to process fat, meaning their bodies had been primed through fasting to burn more fat.

Hespel recommends people do this kind of training before breakfast, since eating carbohydrates interrupts the process of metabolizing fat for about six hours afterward. Though he and colleagues have primarily studied the effects of exercising without eating in young, healthy people, he thinks the method could also help people with problems like diabetes. Because exercising without eating produces muscles that are better at absorbing glucose – which is important for preventing diabetes – Hespel theorized the strategy would also help diabetics control their insulin levels.

Other experts say that even though people may burn more fat this way, it is mostly fat within the muscles that will be lost and won’t make a big difference to people trying to lose weight.

"When you exercise (without eating), fat is broken down more quickly in the muscle," says Andrew Greenberg, director of the Obesity and Metabolism Laboratory at Tufts University.

"You may enhance how you burn the fat in the muscles, but it doesn’t affect your overall body fat," Greenberg says. He says more intense exercise may prompt the body to burn more fatty acids in other regions of the body, but that a lot of training would be required to see a big difference.

For recreational athletes interested in maximizing their exercise regimen, some experts recommend a regular training session where you deliberately do not eat beforehand.

"Science is finally catching up with what smart runners have always known," says Ron Maughan, a professor of sport, exercise and health sciences at Loughborough University in Britain. "If you have a long, hard run without breakfast once a week, that hard run will train you to burn fat," he says. "And for the rest of the week, have plenty of carbohydrates so you can train hard."

Maughan cautions against doing too much exercise on an empty stomach. "That might help you get very good at burning fat, but you won’t be very good at whatever exercise it is you’re doing," he says. "Without enough fuel, you won’t get the intensity of training you need to get improvements."

Others were more skeptical and said people shouldn’t exercise without having at least a small snack first.

"If your blood sugar is low, you could wind up getting dizzy and you might not be able to exercise as well as if you were well-nourished," she says. Colvin recommends having something small like a banana before training. She also warns the strategy might make people more prone to injury and that eating is important so the body would have enough nutrients to recover from a bout of exercise.

Hespel acknowledges the method wasn’t for everybody and that aside from the pain of struggling through an exercise session while hungry, there are other potential pitfalls. "When you postpone breakfast to exercise, it is possible you might eat more afterward," he says. "People exercising (without eating) need to respect all the normal strategies of weight control like not overeating."

Daniel Kobbina, a personal trainer who also runs a martial arts school in London, says the method requires discipline – but it works. "If you train on an empty stomach, you’ll see that six-pack a lot sooner," he says.