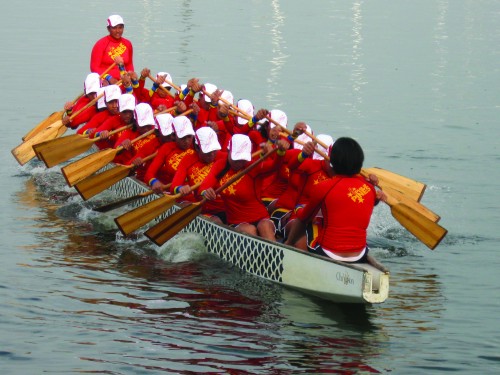 The Philippine women’s national dragon boat team will compete again in the 2010 Macau International Boat Races, running on Saturday June 12, Sunday June 13 and Wednesday June 16 at the Nam Van Lake Nautical Centre. Speaking to Macau Daily Times, Noelle Wenceslao, athlete representative, said that the Macau event is always one of the team’s annual priorities, but what they are really focusing on is the gold medal at the 16th Asian Games, Guangzhou, in mainland China.

The team, formed by 23 paddlers, one drummer and one steersman will compete in the 500 meter Women’s Open. Last year, they won the silver medal in the same competition, with a final time of 2:02 minutes.

The Filipino girls are all amateur athletes. They train six days a week, alternating land and water training, the representative said.

Despite being amateurs, they take dragon boat racing very seriously. “The training volume and intensity increases as we come close to the competition and tapers off one week before the competition, lessening the volume without decreasing the intensity. Training is divided into different phases throughout the season," the representative explained.

"The Coach divided the training into a 3-week cycle of maximal strength and power endurance making sure that training peaks off at the exact schedule of competition," she said.

Following the Macau race, the schedule for this year takes the Philippine men and women’s teams to Zhouqing, China. They will come back for the Asian Games Trial Race in Guangzhou around August and then the 16th Asian Games on November 2010.

In Guangzhou, the Philippine national team is eyeing the gold. The boatmen and boatwomen will vie for honours in all six events – 25-metre, 500-metre and 1,000-metre races.

The Philippine national dragon boat team has won the last two world championships. It is composed of athletes recruited from all over the Philippines, coming from very diverse sporting backgrounds. Their slogan is “Paddle to Win”. Boracay stays at home
Just like last year, the Bugsay Boracay team will not join the Macau competition due to lack of funding. Geraldine Asis, a member of the team, told the MDT that the team Bugsay Boracay split up into two teams: Bugsay Boracay (still) and the Boracay All Stars.

"Since we are relatively new, we haven’t had that much sponsors or funding for trips abroad yet. We are working on acquiring a training boat from the PDBF (Philippine Dragon Boat Federation) so that we can train more often," Asis said.

"Hopefully, with the support of our local government, our team will be able to experience more international races in the future. We’re keeping our fingers crossed,” she said.