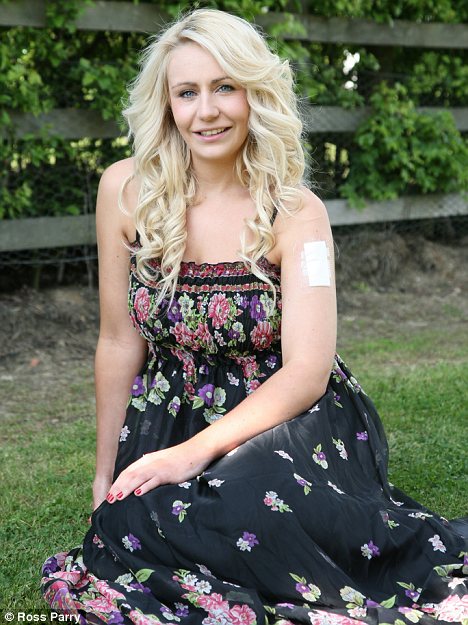 Amy Hills, of Selby, had a cancerous mole removed in an operation on the same day she took part in the Miss York contest

A beauty queen contestant has issued a stark warning against careless sunbathing after revealing she developed skin cancer at the age of just 24.

Amy Hills, a finalist in the Miss York contest taking place this week, topped up her artificial tan at least once a week and refused to use suncream.

But during a routine visit to her doctor she happened to mention that a mole on her left arm had begun to change in appearance.

The dental student was horrified to be told just days later that it was cancerous.

Thankfully an operation last week revealed the cancer had not spread. However, Amy will have to have constant check-ups.

She is speaking out about her ordeal as a warning to other women tempted to take terrible risks in their quest for a golden glow.

Amy, of Selby, North Yorkshire, said: ‘Like a lot of other young woman, I wanted to look good and so would go for a tan about once a week.

‘And when I sunbathed, I wouldn’t normally use suntan lotion. I thought it would never happen to me.

‘But I noticed that the mole on my arm which I had always had had begun to change about six months ago. It was darker, raised and had a jagged edge.

‘The doctor called in with a colleague to have a look, and they both said it needed to be removed as a matter of urgency. When the test results came back saying it was cancer I was in a state of shock.

‘The doctors said they were sure it was it was my sunbed sessions and sunbathing without lotion that had led to this.’

Amy underwent surgery last week just hours before she took part in a ‘boot camp’ style challenge as part of the build-up to the Miss York contest.

Doctors have told her she needs a check-up every three months for the next five years to ensure the potentially fatal cancer has not returned.

They also warned her off tanning salons for life and said she should always wear suntan lotion with a protection factor of at least 30 in the sunshine.

She added: ‘It’s left a dent on my arm which will always be there. They are very hopeful they have removed everything that is cancerous.

‘But if I hadn’t been to the doctor about something else, I might have left it for months more, which could have allowed it to spread further.

This site contains materials from other clearly stated media sources for the purpose of discussion stimulation and content enrichment among our members only.
whatsonxiamen.com does not necessarily endorse their views or the accuracy of their content. For copyright infringement issues please contact editor@whatsonsanya.com