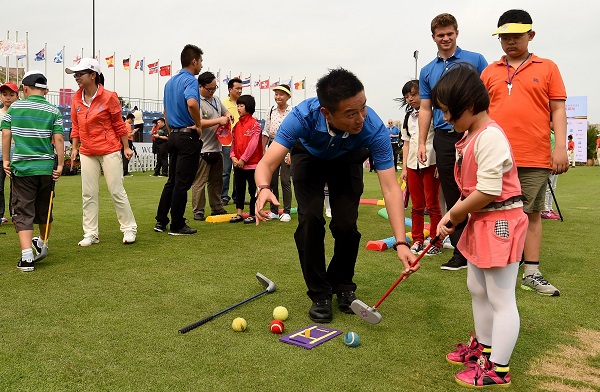 A group of local youngsters were treated to an inspiring look at the game of golf by some of the Ladies European Tour’s leading professionals as they gathered on the sidelines of the US$600,000 World Ladies Championship.

Sophie Walker, Florentyna Parker, Amy Boulden, Caroline Martens, Ann-Kathrin Lindner and Carin Koch were on hand at the at Mission Hills Haikou resort’s driving range for a special session that allowed around 200 youngsters from local schools to learn all about golf – many for the first time.

After an impromptu crash course in Mandarin – staged much to the delight of the cheering kids – the players set down to the task of teaching, showing off their skills with a variety of clubs and then taking part in an accuracy competition.

Afterwards the players were each asked to pass on one of the secrets to their success in the game. “You have to practice a lot to be good at golf,” said Koch. “It’s a hard game but a fun one when you learn it properly.”

Walker, meanwhile, stressed the importance of not trying to hit the ball too hard, while Parker said exploring as many sports as possible was a great way for youngsters to find their way naturally to the sport that suits their skills set – and that she hoped for those gathered this would be golf.

Lindner said it was important for kids to realise early that staying healthy and working on their fitness was a life-long commitment while Martens said the secret to her success was her ‘good rhythm and tempo’ and then pointed to the three golden rules of golf development – practice, practice, practice.

Mission Hills Group Vice Chairman Tenniel Chu said he hoped the children would be inspired by the experience to pick up a golf club and take to the game.

"It has been an exciting week, with some of the greats of the game here at Mission Hills Haikou,” said Chu.

"These players share our commitment to growing the game in China and throughout Asia and that’s why they generously gave of their time to help show these children a little about what makes this game so great. Who knows, maybe there was a future world number one out there in the crowd.”

Jacobsen, an Executive Member of the Asian Golf Industry Federation, is among the sponsors of the World Ladies Championship.