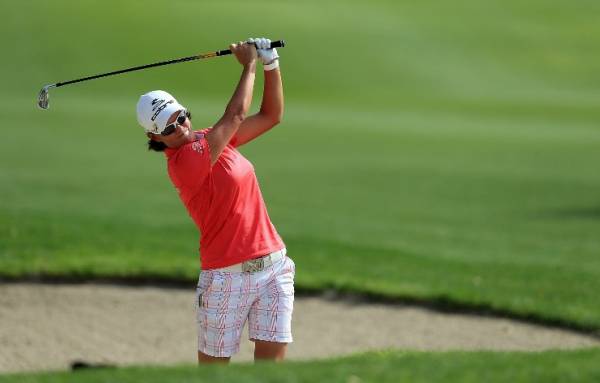 South African golfer Lee-Anne Pace picked up her third Ladies European Tour (LET) win of the year with a playoff victory in the Sanya Ladies Open in Hainan, China on Sunday. Picture: AFP

South African golfer Lee-Anne Pace picked up her third Ladies European Tour (LET) win of the year with a playoff victory in the Sanya Ladies Open in Hainan, China on Sunday.
Pace, the 2010 LET Order of merit winner beat Korean Yu Yang Zhang with a birdie on the first playoff hole to clinch the title.
I started to get really pumped up towards the end and all the feelings came back from 2010 when I won here and I made a birdie on 16 in 2010 so I was really pumped up to go.
The win followed victories in Turkey and Spain earlier this year, and with her earnings from the event moved up to second in the money list. Pace has notched up 241 940 Euros for the season, but is some way behind number one Suzann Petterson of Norway with 518 448 Euros.
Pace had previously tasted victory at the event in 2010 in a stellar season including five wins.
“I love it here. It’s a really nice feeling to come back and win here again,” Pace told the LET after her round.
Pace compiled rounds 67 66 and a final round 70 to get to a 13 under par 203 total for the week, and match Zhang in the clubhouse.
Her round got off to a shaky start with a par on the par five first, before dropping a shot at the par four second. Pace, however, bounced straight back with a birdie at the third.
Another bogey at the sixth followed, but again Pace replied but this time with two birdies in a row from the par four seventh to go out in one under.
Coming home, Pace reeled off five pars from the 10th before birdies at the 15th and 16th. Again, a bogey was the best Pace could manage on the 17th, meaning the 32-year-old needed a birdie on the last to take the win in regulation play.
Pace was unable to make a 12 footer for birdie on the 18th, but kept her composure to later beat the Korean in the playoff.
SOURCE: enca.com
Editorial Message
This site contains materials from other clearly stated media sources for the purpose of discussion stimulation and content enrichment among our members only.
whatsonsanya.com does not necessarily endorse their views or the accuracy of their content. For copyright infringement issues please contact editor@whatsonsanya.com

Next news: Sanya plans to attend 10 int’l tourism fairs to promote its tourism in 2014