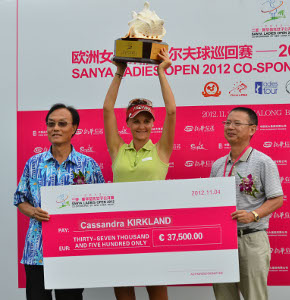 The 28-year-old from Paris held off stiff opposition to post a final round 70 on a hot and breezy final day at Yalong Bay Golf Club in Sanya, a tropical city in Southern China’s Hainan Province.

She ended two strokes clear of fellow Frenchwoman Jade Schaeffer and England’s Holly Aitchison, with a further nine players a stroke back in a tie for fourth.

"It was totally unexpected because I’ve struggled so much this year and I didn’t have my 6-iron, so I guess I didn’t have any expectations this week and I didn’t put any pressure on myself. I didn’t feel stressed out there so it was really good," said Kirkland, the sixth-season Ladies European Tour professional, whose previous best finish was fifth at the 2010 Hero Women’s Indian Open.

Thailand’s Numa Gulyanamitta started with a one stroke lead but Kirkland quickly claimed the advantage after two holes, when she birdied and Gulyanamitta put her second shot into the water and finally lost her advantage.

"When I made that shot I was like, I think this is my day. I felt more confident of course," said Kirkland.

The 16-year-old young professional Lin Xiyu and 35-year-old Lu Yuexia were the best Chinese players finishing in a share of fourth on three under par after final rounds of 69 and 71 respectively on Sunday.

Previous news: Hainan Airlines’‘Lovers above the Sky’ program given cold shoulder in Shanghai