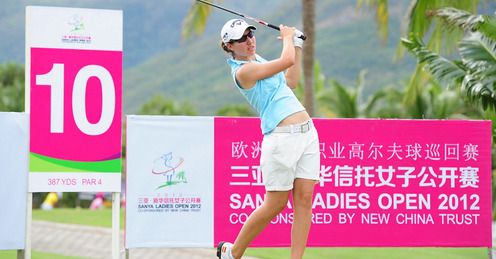 Ciganda: Flying high in rookie season
Spain’s Carlota Ciganda appears totally impervious to the pressure of being European number one and says that she has taken a relaxed approach to this week’s Sanya Ladies Open in China.

Despite making her debut appearance in the €250,000 event, the 22-year-old rookie will tee up as one of the favourites at Yalong Bay Golf Club after earning her second LET victory at the Suzhou Taihu Ladies Open on Sunday.

Quietly confident Ciganda leads the LET’s 2012 ISPS Handa Order of Merit and will be looking to keep second ranked Caroline Masson at bay again after the German earned a runner-up spot at the weekend.
With only three events to play, the heat is on in China but Ciganda remains typically cool and unaffected.

Sitting on the same latitude as the Hawaiian Islands, Yalong Bay’s setting on the southern tip of Hainan is bathed in sunshine and perfect for golf.

Known as the Hawaii of the orient, it’s circled by blue seas and superb beaches and Ciganda has been enjoying the facilities at the Mangrove Tree Resort, a luxury hotel with a Balinese style.

"It reminds me of Hawaii: very green, a lot of vegetation, nice hotels and nice courses so it’s similar," she said. "The golf course is very nice. It’s nice weather, very humid and hot. It’s very different from last week. The greens are smaller and grainy grass but they roll very well and the fairways are good. I think it’s a good course."

Ciganda has enjoyed an outstanding rookie season as a professional highlighted by her two victories in the Netherlands and China.

She currently leads the Ladies European Tour stats for lowest stroke average with 70.5 as well as greens in regulation (79.59%) and total birdies (171) and is virtually assured of the Rookie of the Year title.

She is now looking to match the feat of Laura Davies, who was the only player to win the LET’s order of merit and Rookie of the Year titles in the same year, in 1985.

Only three players have achieved a similar feat on the LPGA Tour: Nancy Lopez in 1978, Karrie Webb in 1996 and Jiyai Shin in 2009.

No player has won the rookie of the year and finished the season as number one on the men’s European Tour. Jose Maria Olazabal came closest in 1986, when he was second, while Sergio Garcia was next, finishing third in his rookie year in 1999.

Ciganda would be approximately three months older than Davies when she won both titles 27 years ago were she to achieve the feat this December however she is trying not to think that far ahead.

"I’m going to think about this week and see how it goes," said Ciganda, who is targeting the €37,500 winner’s cheque. She cannot be caught this week with Masson €18,347 behind, followed by Lee-Anne Pace and Carly Booth.

SOURCE: golf365.co.za
Editorial Message
This site contains materials from other clearly stated media sources for the purpose of discussion stimulation and content enrichment among our members only.
whatsonsanya.com does not necessarily endorse their views or the accuracy of their content. For copyright infringement issues please contact editor@whatsonsanya.com