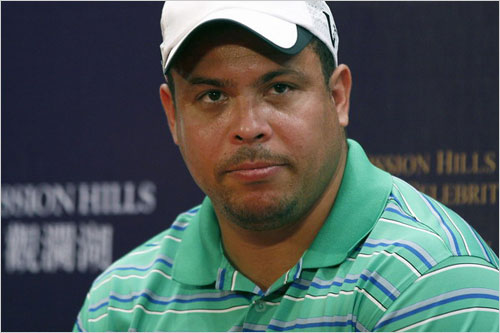 The one million U.S. dollars tournament was first staged in 2010 and has become one of the region’s leading lifestyle and entertainment events.

The event is divided into two parts including Pro-Am match and individual match.

Phelps said this is the second time for him to participate in this event.

"I could enjoy the sport with my friends on the course," said Phelps.

(L-R) Former Brazilian national soccer player Ronaldo, Chairman and CEO of Mission Hills group Ken Chu and US Olympic swimmer Michael Phelps pose for a picture during a news conference ahead of the Mission Hills World Celebrity Pro-Am tournament in Haikou, China’s Hainan province October 18, 2012. [Photo: Agencies]
SOURCE: CRI
Editorial Message
This site contains materials from other clearly stated media sources for the purpose of discussion stimulation and content enrichment among our members only.
whatsonsanya.com does not necessarily endorse their views or the accuracy of their content. For copyright infringement issues please contact editor@whatsonsanya.com