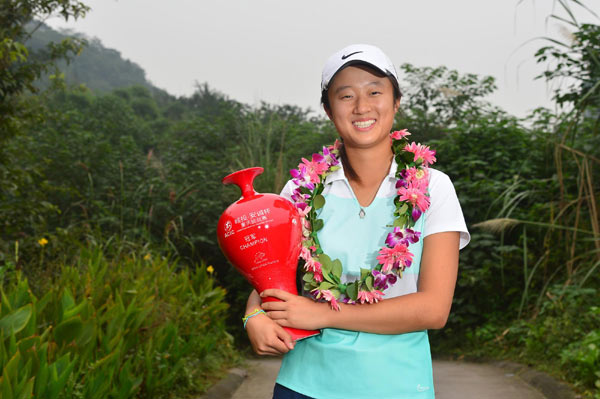 Liu Yu poses with the winner’s trophy on Sunday. [Provided to China Daily]
Liu Yu became the second amateur to win a China LPGA Tour event this year when the 17-year-old held her nerve to close with a 71 on Sunday, capturing the Chengtou Ancheng Cup Chongqing Challenge by two strokes over fellow amateur Shi Yuting.

Less than two months after 17-year-old Feng Simin became the first amateur to achieve the feat at the Wuhan Challenge on the fourth-year tour, Liu carded five birdies, two bogeys and a double bogey over the Chongqing Poly Golf Club South Course for a five-under 211 score.

Adding to the strong performance by Chinese amateurs were He Muni (73) in equal sixth, and Zhang Weiwei (70) and Ji Rong (72) in equal 10th.

"I’m happy now, but I’m not overexcited as I had expected," said Beijing native Liu, who held a two-shot lead going into the final round. "Now I’m calm. This is not only my first win in the pro ranks, but also my first win this year. I haven’t won anywhere before."

Despite registering a double-bogey six at the par-four 10th when she hooked her tee shot and lost her ball, Liu said she didn’t let it get to her. "I didn’t give up because I knew there was still a lot of golf to play and I was in contention. I’m happy how I handled it because if such things happened last year I would have panicked because I didn’t know how to relax.

"At the last hole when Shi Yuting hit a bad third shot I think I can win this. It’s great to finish with a six-foot birdie."

With heavy rain hitting Chongqing over the past few months, Shi, a 14-year-old who won two amateur events last month, found it hard to get going in the damp conditions as her round featured three birdies and two bogeys.

"I had a chance. I didn’t give up from start to end. I’m not disappointed, even though I had a great chance. In fact, I’m happy to be the second. That was a great finish for me because when I entered the tournament this week I didn’t think I could be runner-up."

Thailand’s Tanaporn Kongkiakrai carded the low round of the tournament when she shot a 66 on the strength of seven birdies to finish third, three shots back. As the top professional, the 20-year-old takes home the 500,000 yuan ($79,784) tournament’s 75,000 yuan winner’s purse.

"My putting was very good today. On the first day I couldn’t putt. But today I hit 13 fairways and 14 greens so I was really steady," said Tanaporn, winner of last year’s Thailand Ladies Open. "I wasn’t thinking about winning after the way I played the first two days, just top-10. I’ve played seven weeks in a row and my back hurts."

The fourth year of the CLPGA Tour features eight events culminating in the $250,000 Hyundai China Ladies Open this December in Xiamen,Fujian province.