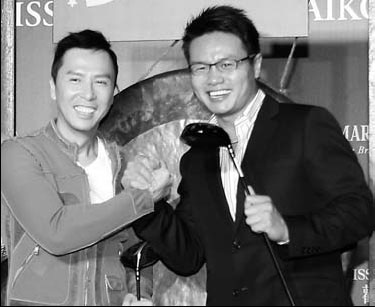 Hong Kong action star Yen Ji-Dan, also known as Donnie Yen, will promote golf instead of kung fu as the event ambassador of the 2012 Mission Hills World Celebrity Pro-Am, which will tee off on Friday at Mission Hills Haikou in Hainan province.

Yen is known for popularizing the martial arts style known as wing chun in the movie Ip Man, in which he played the titular role of a martial arts grandmaster. His mission is a bit different this time.

According to Ken Chu, chairman and CEO of Mission Hills Group, inviting Yen may attract more people to the game.

"There is a similarity between golf and kung fu, both of which require more IQ and EQ than muscles," Chu said.

Yen said he plays well on the driving range.

"I probably do have some talent in play golf. Chu invited Tiger Woods’ coach to train me, so I might improve a lot this time," said Yen.

Yen joked he may have a better chance of beating movie star Eric Tsang in the event.

"He won last year, but there is a Cantonese saying that any random boxer can beat a kung fu veteran to death," he said.

The event will be held Oct 19-21, with a number of celebrities competing.

"This is a unique golf event with countless people from various professions – film, celebrities, golf, kung fu and sports," Chu said. "Men and women will play together."

The tournament was first staged in 2010 and has become one of the region’s leading lifestyle and entertainment events. The professional golfers will compete for a purse of $1 million.

Yen said he is most looking forward to seeing Phelps.

"He has won so many gold medals, I really look forward to meeting him on the greens," Yen said.