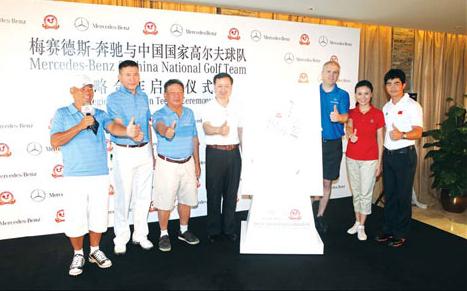 Mercedes-Benz has a natural alliance with golf, an iconic sport whose quest for perfection also exemplifies a core value from the carmaker’s co-founder Gottlieb Daimler – "The best or nothing".

On June 8 the automaker announced the commencement of a strategic partnership with China Golf Association during the final round of the 10th MercedesTrophy in Wanning, Hainan province.

"The strategic partnership between Mercedes-Benz and China’s golf team will be a significant alliance," Mao Jingbo, vice-president of Mercedes-Benz (China) Ltd, said at the signing ceremony. "This partnership shows that Mercedes-Benz China has created a strategic pattern – the top-level players, the most professional teams and the highest amateur tournaments – for its golf marketing."

Li Dazheng, deputy director of the multi-ball games administrative center with the General Administration of Sport of China and vice-president of the China Golf Association, said "the Mercedes-Benz brand value of ‘The best or nothing’ will also be the goal of the China National Golf Team in its relentless pursuit".

"I hope we can work together on a bright future for golf in China," he added.

Showing its strong commitment to the Chinese market and consumers, it is the first time Mercedes-Benz has become the partner of any national golf team around the world.

But the automaker has long supported golf programs because it shares the same affluent market.

China now has about 3 million golfers, a figure authorities expect will double over the next five years and hit 12 million in a decade.

Mercedes-Benz has similar ambitions. Its projections indicate China will be its largest market by 2015 with annual sales of 300,000 vehicles.

After an absence of 112 years, golf will return to the Olympic Games in 2016 and Mercedes-Benz will use its long experience in the sport to support China’s national team in its bid for greater achievements.

Mercedes-Benz golf sponsorship programs include the MercedesTrophy, known as the "most professional amateur golf tournament" that began in 1989.

Since the tournament arrived in China in 2003 it has become one of the top events for domestic amateurs.

To celebrate the 10th edition of MercedesTrophy in China, the German company invited champions of the nine previous tournaments back to golf courses in Wanning to again display their skills.

Mercedes-Benz’s brand ambassador Liang Wenchong and Hu Mu shared their experience and insights with participants. Liang is China’s top golfer and the captain of the national team.

"The 10th edition of the MercedesTrophy in China is a jubilee of great significance," said Bjorn Hauber, executive vice-president for sales and marketing at Mercedes-Benz (China) Ltd.

"Not only does it mark the development of a great annual tradition that in its very essence represents our focus and dedication to our customers and friends of the brand, it also stands as one of the world’s largest and finest golf tournaments of its kind," he added.

"The sport of golf clearly stands as a key pillar for the Mercedes-Benz brand. In the world and in China, our involvement in major world tournaments and top player endorsements is a great testament that our motto ‘The best or nothing’ drives us in all that we do."