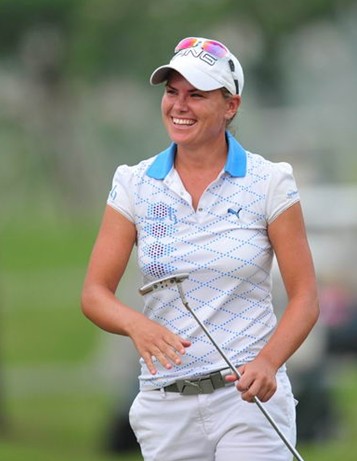 Lee-Anne Pace, the South African money list leader in LET 2010, has recently confirmed her participation.
The inaugural World Ladies Championship (WLC) is set to debut on the Vintage Course at Mission Hills Hainan from 2 to 4 March 2012. Incorporating ideas from the World Golf Championships and World Cup, the WLC adopts a new format compatible with the Olympics where golf will once again be showcased in 2016.
The China Golf Association (CGA), Mission Hills Group, China LPGA Tour and Ladies European Tour (LET) are committed to creating a world-class tournament. The WLC will concurrently feature three, 54-hole competitions: individual professional play, professional team play and individual amateur play. Co-sanctioned by the LET and China LPGA Tour, the WLC will award points to members of both Tours.

Offering a total prize purse of US$600,000, the WLC field will feature 108 elite players from the LET as well as the LPGA Tours of the U.S., Korea, Japan and China.

The host Vintage Course at Mission Hills is designed by Brain Curley and inspired by classic American golf courses built at the turn of the 20th century. It takes its cue from revered layouts such as the National Golf Links, Fishers Island, Maidstone, Chicago Golf Club and Garden City Golf Club.
Lee-Anne Pace, the South African money list leader in LET 2010, has recently confirmed her participation.
Pace said: "I feel really excited because it is a new tournament. I love playing in China and am really looking forward to playing at Mission Hills. I think my chances here are pretty good, especially in the team event. It’s exciting playing in a team format, but it’s also a pretty big tournament for us as individuals as well, so the focus will be on both."
Representing China in the team competition, Feng Shanshan, the two-time Japan LPGA title-holder, currently ranked 13th in the world, will team up with Ye Liying, another winner on the same tour.
"The game format is very special. I feel that I’m no longer playing just for myself but for China. I’m very much looking forward to playing alongside Feng Shanshan," stated Ye Liying.
As China’s leading golfer, Ye earned qualification for the LPGA playoffs in 2005, writing a new page in the country’s golf history in foreign competition.
On the birth of the World Ladies Championships, Ye commented: "For Chinese players, the World Ladies Championships is undoubtedly great news. Without having to leave their homeland, local players are able to play in an international tournament, compete against top competitors and get valuable experience in important matches. "
The launch of WLC has enjoyed support from different sections within the golf community. Conceived at the Presidents Cup in Melbourne in November 2011, the tournament not only meets the need in China for golf development but also provides a larger international, competitive stage. "We are hoping to witness the birth of a new national hero at the WLC," said Ms. Li Hon, General Manager of China LPGA Tour.
"It is not only another international, competitive platform for our players but also a larger stage, allowing for more local challengers. I believe it will definitely ring in a new era for women’s golf in our homeland," said Mr. Zhang Xiaoning, Director & Secretary General, China Golf Association.
"Mission Hills has always been devoted to popularizing and promoting golf through competitions. As the sport is once again approved as an Olympic event, we will proactively cooperate with different industry bodies to support the development of professional women’s golf and achieve breakthroughs in the women’s game," added Tenniel Chu, Vice Chairman of Mission Hills.
Other than serving as the China LPGT’s first stop in 2012, WLC will also be a curtain-raiser for the women’s golf season in mainland China.
SOURCE: thesportscampus.com
Read more:
Haikou to welcome China’s 1st World Ladies Championships

Previous news: Telefonica lifted off the water in Sanya, restored into top forms

Next news: Super Bowl becomes available on Hainan-Sports, according to NFL China