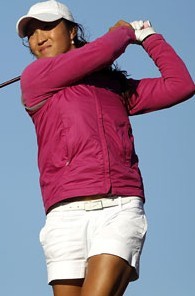 The 23-year-old birdied the final hole at Yalong Bay Golf Club to edge one stroke clear of Scotland’s Vikki Laing, who closed with a bogey after getting caught in the bunker.

Advertisement: Story continues below "It feels unreal … It hasn’t hit me yet," said Bondad.

Bondad picked up momentum when she holed a 35 foot putt for an eagle three on the ninth green before holing a 15 footer for birdie at the par-four 12th.

She then struck an arrow-straight three-wood to the front of the 13th green from 180 metres and two putted for birdie to tie for the lead with Laing on 10 under par.

Laing moved a stroke ahead when she sank a long birdie putt at the 14th and held a one stroke lead standing on the 18th tee, before dropping one stroke after finding the bunker.

Bondad sealed the victory with an eight foot putt.

"I was hitting it close and I just wasn’t making any putts and when that eagle putt went in at the ninth, that kept me going, and made me think, `I can get up there’," she said.

Bondad, whose previous best finish in four seasons on the Ladies European Tour was a tie for second at the 2010 Open de Espana Femenino, said that a course of hypnotherapy had been instrumental to her victory.

Ranked 65th on the LETs Henderson Money List, she felt she was struggling and recently went in search of something different to turn her game around.

"I got hypnotised two weeks ago and he spoke to my subconscious mind and got rid of my bad past," Bondad said.

"I’ve just been taking this herbal medicine and found out a few things about myself. I’ve sorted that out and its unbelievable the way its changed me."

South African Ashleigh Simon fired a 69 and ended in a share of third with the long-hitting overnight leader Pan, who shot 72.

Her countrywoman Lin Xiyu improved on her share of ninth place in 2010 to end in a tie for fifth at six under with Finland’s Minea Blomqvist, Australian Stacey Keating and Thailand’s Patcharajutar Kongkraphan.

China will be watching Lin as the 15-year-old professional improves in the lead up to the 2016 Olympic Games and she looks an exciting prospect for women’s golf.

She and the other players will now head to mainland China for the Suzhou Taihu Ladies Open near Shanghai, where world No.1 Yani Tseng will form part of another strong field.

SOURCE: news.smh.com.au
Editorial Message
This site contains materials from other clearly stated media sources for the purpose of discussion stimulation and content enrichment among our members only.
whatsonsanya.com does not necessarily endorse their views or the accuracy of their content. For copyright infringement issues please contact editor@whatsonsanya.com