Tiger Woods to miss British Open due to leg injuries 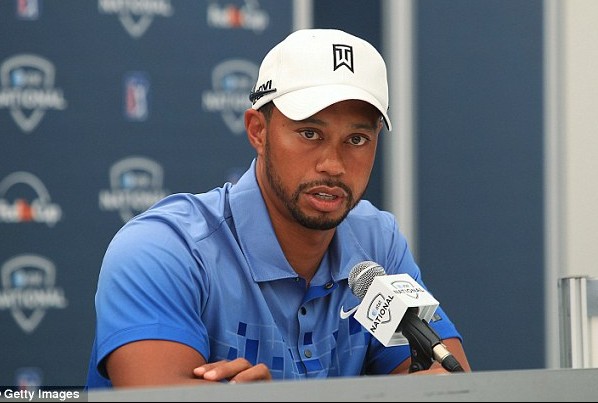 Major blow: Tiger Woods will miss The Open for the second time in four years due to injury
Those "minor" injuries to his left leg will keep Tiger Woods from playing in a second straight major, next week’s British Open.
In an announcement on his website on Tuesday that came as no surprise, Woods said he will miss the British Open because his injuries have not fully healed.
"Unfortunately, I’ve been advised that I should not play in the British Open," Woods said. "As I stated at the AT&T National, I am only going to come back when I’m 100 percent ready. I do not want to risk further injury. That’s different for me, but I’m being smarter this time.
"I’m very disappointed and want to express my regrets to the British Open fans."
It will be the second time in the last four years that Woods has missed two majors in one season. He did not play the British Open and U.S. PGA Championship in 2008 while recovering from reconstructive surgery on his left knee. These injuries are not as easy to describe.
Woods said in May that he suffered "minor injuries" to knee ligaments and his Achilles while hitting from an awkward stance in the pine straw on the 17th hole in the third round at the Masters. He skipped the Wells Fargo Championship, and withdrew after nine holes from The Players Championship a week later because of injury.
Woods said last week it was a mistake to go to The Players, and that if he had waited, he would be playing golf right now.
"In hindsight, I probably shouldn’t have competed at The Players, but it’s a big event, and I wanted to be there to support the tour," he said. "I’ve got to learn from what I did there and do it right this time and not come back until I’m ready."
Woods was replaced at Royal St. George’s by Jason Dufner, who said on Twitter, "Looks like I am getting in the open championship, I am excited!"
Brendan Jones was the next alternate, but the Australian told the Royal & Ancient he would not be able to play because his wife is expecting their first child.
Woods called R&A chief executive Peter Dawson to tell him he would not be playing.
"I know how disappointed Tiger is not to be able to play in the Open this year," Dawson said. "Naturally, we are sorry that a player of his caliber isn’t able to join us at Royal St. George’s, but we wish him well in his recovery and hope to see him back soon, competing in front of the fans that love to see him play the game."
Woods tied for fourth in the 2003 British Open at Royal St. George’s, where he started with a two-shot penalty when he couldn’t find his opening tee shot in the rough. He wound up two shots behind Ben Curtis.
He did not say whether he expected to play in the final major, the U.S. PGA Championship, which starts on Aug. 11 at the Atlanta Athletic Club. As Woods mentioned last week at Aronimink, he doesn’t have any idea when he will next compete. He said he has not hit golf balls since May 12 at the TPC Sawgrass.
Woods has slipped to No. 17 in the world, and is likely to be out of the top 20 after the British Open.
He also is No. 116 in the FedEx Cup standings on the U.S. PGA Tour, and only the top 125 qualify for the playoffs. If he doesn’t return for the U.S. PGA Championship, he wouldn’t be eligible for any U.S. PGA Tour events until October.
Asked last week if he would be surprised he didn’t play another tournament the rest of the year, Woods said, "I’d be very surprised, because I’m progressing."
But he’s not making enough progress to play in the tournaments that mean the most to him. Woods remains on 14 career majors, four short of matching the record set by Jack Nicklaus.
SOURCE: cbsnews.com
Editorial Message
This site contains materials from other clearly stated media sources for the purpose of discussion stimulation and content enrichment among our members only.
whatsonningbo.com does not necessarily endorse their views or the accuracy of their content. For copyright infringement issues please contact editor@whatsonsanya.com