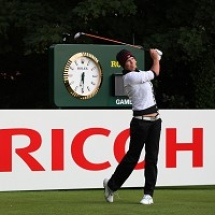 The 29-year-old’s 11-under-par total at Yalong Bay Golf Club was enough for a one-stroke victory over long-time leader Stefanie Michl and saw her overhaul England’s Laura Davies at the top of the money list.

Michl led by two shots from England’s Florentyna Parker after Saturday’s third round. Pace was two shots further back but four birdies on the front nine saw her move into a share of top spot. Michl responded with three straight birdies from the 12th but she bogeyed the 15th and was made to pay as Pace quickly tied things up with a birdie.

And when the 24-year-old Austrian missed the final green, Pace was left with two putts to secure her fourth title of the year.

"I can’t believe it. I’m a little bit overwhelmed," she said. "I didn’t quite expect to win today but I wanted to get a little bit of a chase, which I did, so I’m just over the moon."

"It was a tight finish. I was still a couple of shots behind and she had three birdies in a row and then I missed my birdie putt, so she was two ahead, and then fortunately I made a bunker save on 15, which was good."

Thailand’s Pornanong Phatlum shot 67 to finish third on eight under, one shot ahead of Australian Nikki Garrett. Parker slipped into a four-way tie for fifth, which also included Scotland’s Vikki Laing, after a 73. Spain’s Belen Mozo provided the highlight of the final day’s play with a hole in one at the third.

Pace will have the chance to further stretch her lead over Davies, which currently stands at almost 26,000 euros (£23,000), in next week’s Suzhou Taihu Ladies Open as the English veteran skips the event.

warwickcourier.co.uk
Editorial Message
This site contains materials from other clearly stated media sources for the purpose of discussion stimulation and content enrichment among our members only.
whatsonsanya.com does not necessarily endorse their views or the accuracy of their content. For copyright infringement issues please contact editor@whatsonsanya.com