HomeSports & RecreationGolf in SanyaGolf, a fast-growing sport in Hainan for the local rich and tourists

Golf, a fast-growing sport in Hainan for the local rich and tourists 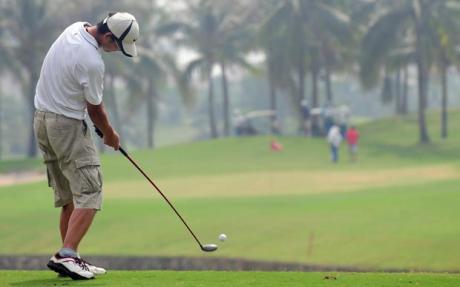 Golf, a fast-growing sport in Hainan for the local rich and tourists
"The weather here is very good for playing golf – there’s the sun, the sand and the beach. That’s the greatest advantage," Chen said after a round of golf with friends in the southern resort city of Sanya.

His words could have come straight from the tourism development manual of this island province, which is playing up its tropical climate in an attempt to position itself as a "golf island", the capital of the sport in China.

Golf courses have sprouted across the country as the sport catches on, but no place has hitched its wagon to the sport quite like Hainan, which resembles an oval golf green on a map of the South China sea.

A decade ago, there were no golf courses here; today there are more than 20 and long-term goals include having 100 courses, which would be about one-fifth of China’s current total.

For some golf operators, expansion cannot come fast enough, especially in winter when icy weather across much of China sends golfers to Hainan in droves.

"Year after year we have found it really tough in winter to satisfy golfers’ demands," said Deborah Jiang, deputy manager of the 18-hole Yalong Bay golf club, one of the island’s first courses.

Jiang said the club hosted 40,000 rounds of golf last year – double the number just a few years ago – and will soon build another 18 holes to handle growth.

Sanya, the main resort area, had six million visitors last year, up 30 per cent from 2006, according to government data, with plenty of golf attire mixing with the head-to-toe matching floral print outfits of many Chinese tourists.

The economic crisis has stemmed the flow of South Korean and Japanese golfers who formerly made up 80 per cent of the island’s business in the sport, Jiang said. But the growing number of mainland golfers has filled the gap.

"If I want to go golf in Thailand or Hong Kong I can, but this is more convenient," said Chen, a Sichuan businessman. "I can just catch a flight without needing a visa. It’s an advantage to not have to go abroad to play golf."

From the first course, built 25 years ago, China now has at least 500, the vast majority built in the past few years, according to the government, although state media reports say that many more may exist.

In previous centuries, Hainan was a backwater where political troublemakers were exiled, and then became the site of a massive 1990s real estate boom and bust.

The boom is back, this time with golf at its core.

The potential for Hainan golf contracts was a factor in leading American golf course designer Schmidt-Curley’s decision to open their head China office in Haikou, the island’s capital.

"Hainan will be one of our stronger markets in China for some period of time," said company co-founder Brian Curley, who thinks that golf on the island is driven largely by proliferating real estate developments around the courses.

The pace of China’s golf course development has caused concerns about the dwindling amount of agricultural land.

Central government authorities ordered a nationwide moratorium on new courses in 2004, but development has continued as revenue-minded local officials have gone their own way, even offering tax breaks for operators of new courses in places like Hainan.

The Hainan authorities declined requests for an interview.

The central government recently ordered a count of golf courses nationally, but it is unlikely to halt the growth of the sport’s popularity – especially with last month’s decision to add golf to the 2016 Olympic Games.

Expectations are high on Hainan that China will develop its golf interests in a bid to dominate yet another Olympic event.

"With golf coming back to the Olympics, we all hope that in the near future we can get more support from the central government to help golf clubs to grow, to give us big support," said Jiang, of Yalong Bay golf club.

SOURCE: www.telegraph.co.uk
Editorial Message
This site contains materials from other clearly stated media sources for the purpose of discussion stimulation and content enrichment among our members only.
whatsonsanya.com does not necessarily endorse their views or the accuracy of their content. For copyright infringement issues please contact editor@whatsonsanya.com