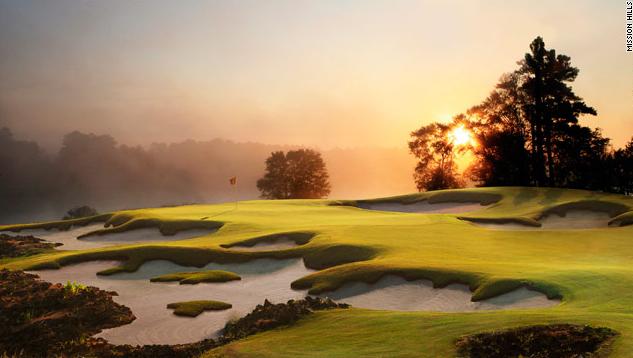 Mission Hills Haikou is setting out to be one of the world’s premier golf destinations, with at least 10 top-class courses. The 7777-yard Blackstone Course weaves through a landscape of black lava rock

The design team of Lee Schmidt and Brian Curley has created many great courses around Asia: the outstanding Chiang Mai Highlands in northern Thailand, the new Clearwater Bay Golf Club in Hainan Island and Siam Golf and Country Club on the outskirts of Pattaya, to name just a few. But perhaps overshadowing the many exciting designs the pair are credited with is the abundance of courses they have built for others. Much like a ghostwriter who pens a book for a famous person, the American pair have also overseen construction of some of the best-known courses in the region that were designed by other signature designers and touring pros. Among them are such famed layouts as the Jack Nicklaus Mountain Course at Spring City in Kunming and 10 of the 12 layouts at the Mission Hills Golf Club outside Shenzhen that bear the names of such legends as Nick Faldo, Greg Norman, Jose Maria Olazabal and Pete Dye, among others.

When the Mission Hills Group expanded its empire to Haikou, Hainan Island earlier this year, they again tapped Schmidt and Curley for a prominent role in the project, which is said to be roughly equivalent to the size of Hong Kong Island. But unlike the 216 signature holes at the original Mission Hills, there are no celebrity design names attached yet to the planned 22 layouts at Haikou. Schmidt and Curley have been asked to design the three courses scheduled to open first.

The American pair has been given license to create layouts here that "draw inspiration from iconic international designs." The Blackstone Course, which will serve as Mission Hills Haikou’s tournament venue, has been created from a lava rock foundation. The Stone Outback layout was inspired by the great clubs of Australia’s famed Sandbelt, while the Stone Ruins course has been built inside a walled setting and is patterned after the courses that appeared in the US in the early 20th century.

The 7,777-yard Blackstone layout will host the inaugural Mission Hills Star Trophy in late October. Scheduled to be on hand for the introduction of this luxury resort – which includes a 525-room hotel – is a host of high-wattage stars such as Nick Faldo, Colin Montgomerie, Annika Sorenstam, Lorena Ochoa and China’s Zhang Lianwei, as well as celebrity golfers such as Hugh Grant, Matthew McConaughey, Michael Douglas, Catherine Zeta-Jones and superstar swimmer Michael Phelps.

Players here will find that Schmidt and Curley have created a challenging volcanic theme where the dense lava bed has been filled in with soil for an average depth of over one meter, amid a layout that weaves through a landscape of mature trees, thick jungle vegetation, abundant lakes and wetland.

Curley, who has a more on-site focus than Schmidt, said the volcanic theme was integral to the design as the wild-looking, ragged bunker edges and transitional sand areas "meld seamlessly into the lava rock framing many holes."

"The uncapped portions of the lava bed periodically cross the line of play, requiring forced carries and creating a dramatic visual contrast to the vibrant green turf and sand," Curley says. "We also incorporated lava rock walls and ancient village ruins as a testament to the site’s past. We wanted it to appear as if liquid turf was poured from the sky and flowed along the terrain just as the lava did centuries ago."

Paspalum grass used on the fairways will be instrumental in soaking up the excess water when the rainy season arrives. The Blackstone layout also features some pretty good elevation changes but its rolling topography is relatively easy to walk. The numerous risk/reward opportunities are most prevalent on the inward nine and it is here where the low handicappers will potentially be able to score.

"From tee to green, players experience an immaculate blanket of turf," Curley says. "Blackstone does not feature any rough, even on bunker fingers and surrounds. The hard-line edges associated with most golf courses are non-existent."

Stone Outback may sound more like a steakhouse than a golf course, but it’s indeed a fitting tribute to the famed Sandbelt courses on Australia’s southeast coast, Kingston Heath, Royal Melbourne and Huntingdale, most notably. With eucalyptus trees throughout the 7,325-yard layout, the course features wide fairways to let rip and encourages shot-making into large, undulating greens. Adding to the attraction are deep bunkers with thick, grassy lips in what is truly a walking course.

"While some of the bunkers are formal and surrounded by turf, many transition without a clean edge to the native jungle vegetation bordering the holes," says the Arizona-based Curley. "This creates a unique and much more natural landscape."

The last of this exciting new trio of layouts is Stone Ruins, which indeed feels very old, despite being brand new. Located within a walled setting that must have been a killer to build in the Hainan heat, the 7,363-yard course pays homage to such early American classics as the Chicago Golf Club, National Golf Links and others where the holes are routed through a densely forested site, albeit with a tropical bent.

Highlights here include blind shots, severe ridges, abrupt mounding, varied green sizes and geometric bunkering. All they need here is on-course rabbits and plus-four trousers to add to the authenticity.

"The oldest course in China is a new course in Haikou," says Curley, with a touch of irony. "Stone Ruins provides a welcome relief from the many cookie-cutter layouts that dominate golf today. It recalls an architecture period when experimentation and expression were much more openly embraced."

Previous news: Mundo Colombia 2010 winner to be crowned, will compete in Sanya this Oct.

Next news: CDFG to launch autumn debut in Sanya, deepen its market grip in China