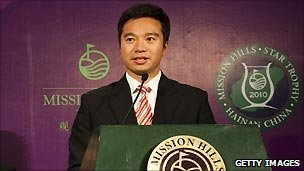 At Mission Hills Shenzhen and its sister Mission Hills Haikou complex in Hainan province, more than 10,000 jobs have been created, says Mr Chu.

He also says they created infrastructure around the courses, such as roads, and as the Shenzhen course was built between the main city and the suburb, it has helped bring those two areas socially closer together.

Furthermore, he believes the courses serve another commercial role by offering a "place to network and to do business".

Now work is under way expanding the second Mission Hills complex in Hainan province, an area that Mr Chu says is being developed as an international tourist island or "Hawaii of the East".

Mission Hills Haikou is based in the capital of southern China’s Hainan Island and opened this spring.

Two courses are currently open, as part of a government-led initiative to make tropical Hainan a leading international tourism destination.

Mr Chu is coy about how much this multi-billion development, which could eventually have as many as 22 courses, is costing.

But the economics graduate says that the complex is "providing the first important investment into the island".

However, there have been questions asked about whether as much as 80 sq km of land should be used for golf courses rather than crop-growing or fruit trees, as some have argued.

And there have been environmental concerns over such a large development.

"Certainly the environmental issue is a main concern to us," says Mr Chu.

"And as the world’s largest population, we also have to think about feeding people before golf."

He adds: "We chose non-agricultural land, on volcanic lava rock where there is no topsoil, no agriculture could take place on that. In fact, we are having to import topsoil for the courses."

Again, there are worries that those low incomes mean locals will not be able to attend the showcase 2011 golf World Cup on Hainan Island.

"Hainan is the only province in China where they have put golf as their official provincial sport," ripostes Mr Chu.

He also says that over the next two to three years, there will be between 50 and 60 new courses built in the province.

"This is the only province where golf is booming, there is no other province where it is growing so fast, and where global firms are looking to get involved in China," he says.

"This complex will help establish Hainan."