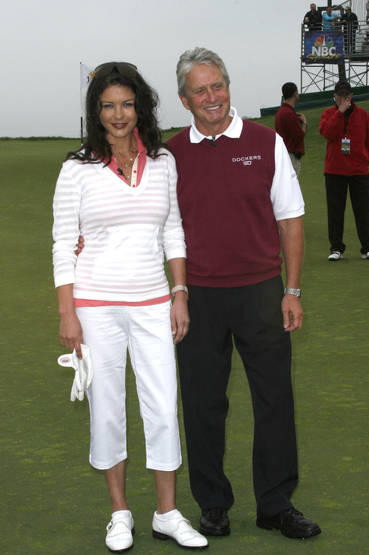 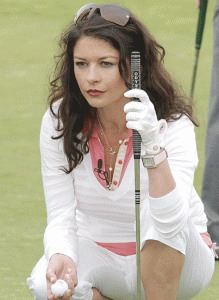 Catherine Zeta-Jones is a huge fan of golf. The famous actress, who just won an award in the 64th Tony Awards and an Academy Award in 2002 for Chicago and plays golf off a handicap of 20, will bring plenty of the glamour to the event along with husband Michael Douglas, a 12-handicapper and two-time Academy Award winner himself.

Also confirmed for the inaugural event, to be played from October 28-31 at Mission Hills•Haikou in Hainan, China, today are actor Christian Slater and Japan’s US PGA TOUR winner Ryuji Imada.

The superstar participants will be part of a field that includes 20 celebrities, 20 professionals and 120 amateurs at the four-day Mission Hills Star Trophy. Amateur teams of three will play with a celebrity or professional golfer on the first two days of the event in a team scramble format.

The weekend play will then be in four-ball stroke play format between 20 teams consisting of a celebrity and a professional, with a 36-hole individual professional event running concurrently on the Blackstone Course. The pro event offers a US$1.28 million first place cheque, the richest individual prize in Asian golf.

Zeta-Jones, who just won an award in the 64th Tony Awards and an Academy Award in 2002 for Chicago and plays golf off a handicap of 20, will bring plenty of the glamour to the event along with husband Michael Douglas, a 12-handicapper and two-time Academy Award winner himself.

Said Zeta-Jones: "Michael and I are looking forward to visiting Hainan for the first time October. We are delighted to participate in the Star Trophy, which will be a wonderful showcase for golf in China and Mission Hills."
Slater, won the MTV Movie Award in 1993, for his work in Untamed Heart and the Broadcast Film Critics Association Award for the Contender in 2001.

Said Slater: "I`m looking forward to be in Hainan, China for the most exciting gold event of the year."
Phelps, who won a record eight gold medals in the pool in Beijing, is eagerly looking forward to returning. "China will always have a special place in my heart, but to come back and have fun playing golf in Mission Hills will be a totally new experience for me. This will be a chance to relax, enjoy China and really see a different side of one of my favourite countries."

Hank Haney has taught more than 200 touring professionals during his 30-years career, and his also a successful author, golf course designer, businessman and television star.

He will serve as "Honorary Coach" for the event and will be on-hand to offer the celebrities swing tips, course management strategies and other support. Hank will also do some live commentary for the tournament television coverage.

Ochoa, who recently retired after being ranked the world’s best female since 2007: "I am very excited about taking a break from my retirement for the first Mission Hills Star Trophy. By offering Asia’s richest first prize for professional golf, the Mission Hills Star Trophy will not only be great fun, but will showcase some fantastic golf as we take aim at that prize. Hopefully, my game is not too rusty after a few months off!"

Said Tenniel Chu, Executive Director, Mission Hills China: "When we announced the first group of superstars for the inaugural Mission Hills Star Trophy at the event’s launch in March, we promised there would be many more to come for Asia’s premier lifestyle event.

"With confirmation that players such as Catherine, Christian both the Michaels, Ryuji and Lorena will be joining us in October, we have not only delivered on that promise but will also ensure that our determination to help grow Hainan into an exciting leisure destination continues," added Chu.

The tournament is one of the first major events supporting a government-led initiative to make the island a leading international tourism destination in the coming years and reaffirm Mission Hills•Haikou as the world’s most memorable golf resort. In 2011, the OMEGA Mission Hills World Cup will also be played at Mission Hills•Haikou.

Mission Hills Hainan occupies a vast lava rock-strewn landscape of undulating terrain punctuated by ancient trees and sweeping wetlands near Haikou and is the sister facility to the world-renowned Mission Hills Shenzhen.

The Mission Hills Star Trophy is a dynamic new event that brings together Hollywood’s A-list elite, international entertainment stars and leading professional golfers at Asia’s most memorable golf resort, Mission Hills•Haikou. The tournament is one of the first major world events that support a government-led initiative to make Hainan a leading international tourism destination in the coming years, a campaign in which golf will play a central role.

The 12-course Mission Hills Shenzhen is recognised by the Guinness World Records as the world’s largest golf facility. It has hosted hundreds of professional and amateur golf tournaments and is home to the Faldo Series Asia, Mission Hills Jack Nicklaus Junior Championship and the Omega Mission Hills World Cup.