Some of the best remote golf courses in China 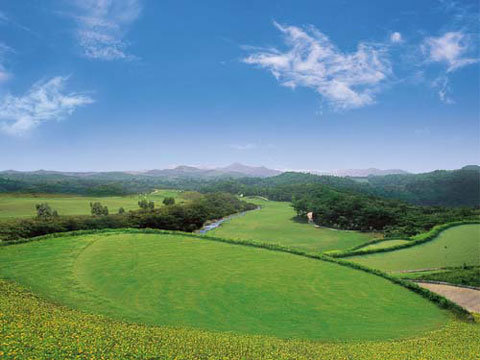 Those who want to experience the best golf in China are certainly spoiled for choice. Yet for the avid golfer, going the extra distance to find that ultimate course can become a way of life. With few courses in the country centrally located in urban areas, lengthy travel is par for the course, making a quick round out of the question for most people.

Yet for those who do make the effort to literally go that extra mile, great rewards await. Whatever style of course you prefer, China has it all: sanctuary-like mountain-top courses, remote links layouts where the only noise is the sound of waves crashing down on the beach, and many world-class resort courses that are as good as anything the professionals play on. The best part is that nearly all the courses have some form of public access and visitors are welcome.
Here is a look at five remote beauties that are worth the journey:

Guangxi Zhuang Autonomous Region only has a handful of courses, and Nanning’s Greenville Golf and Country Club is among the best. While the "country club" claim is a bit overstated, the par-72, 7,061 yard Greenville course makes good use of its mountainous landscape. The challenges are abundant in water hazards — 20 lakes in all — deep sand traps, hidden ditches, dense flora and fauna, and shot-making that is usually either uphill or downhill.

The Lakeview Nine Out Course opener sets the tone as the 433-yard, par-four requires a confident drive over water to reach the fairway and set up an uphill approach to a green with a narrow entrance fortified by bunkers at each side. More great tests come in the 609-yard, par-five sixth, followed by the 370-yard seventh where water has to be safely navigated twice before reaching the long and narrow green.

Par-three holes highlight the Mountain Nine In Course as the 142-yard 12th is a ubiquitous island green where the extremely elevated tee provides a great test in judgment and club selection. The 197-yard 16th is equally tricky as a bunker situated to the left of the green is a challenge to avoid.

This excellent track finishes with a potential birdie opportunity as the 548-yard, par-five 18th requires two good strikes downhill to leave a player looking at the green. The approach, however, will reveal a players’ mettle as it involves an accurate chip to reach a narrow green protected by water on all sides except at the back. A truly thrilling finish when executed correctly.

When the owners of California’s Pebble Beach Golf Club got wind that Golden Pebble Beach Golf Club had opened in China to rave reviews, the American club hastily sent off a letter demanding the Dalian upstart cease from using its "Pebble Beach" name. Honored the famed club had recognized its existence, the Liaoning newcomer wrote back that the area had been called "Pebble Beach" for about 5,000 years and suggested they change their name. The matter was quickly dropped.

Situated on a spectacular cliff-top setting overlooking Bohai Bay, a weekday round at the 36-hole Golden Pebble Beach can be enjoyed for about a fifth of the price of its more famous namesake. Designed by Peter Thompson, the Californian has taken full advantage of the stunning topography by routing the course, wherever possible, along the seaside cliffs. Such routing virtually pulls a player through the course visually on each successive hole. In addition, at different times of the day, due to the severe variations of the tide, the scenery differs: at high tide the ocean crashes against the cliffs, while at low tide the sea floor is visible for hundreds of meters.

The chance to test the 139-yard, par-three seventh hole on the "Divine Tortoise" championship layout here is worth the green fee alone. Known as the "Devil’s Path," the green on this stunning hole sits on a point about 50 meters above the sea. Between the tee-box and green is only the abyss with no chance for recovery.

Fuzhou, the capital of Fujian Province, boasts none of the dynamics or beauty of Xiamen — the most famous city in the southern province — but it does feature the only true links in the country.
On the outskirts of the city, not far from Fuzhou Airport is Trans Strait Golf Club. Originally conceived as a full resort with all the trimmings, the 18-hole golf course was built in the first phase of the project, but construction on the rest of the resort seems to have stalled for now.

While the course’s maintenance program will never win awards, the golf course sits on a magnificent piece of land characterized by towering dunes along the Taiwan Strait. Natural sand, an essential element of links, is everywhere on this Robert Trent Jones II beauty and the famed American designer makes the most of it in abundant bunkers, and penal rough and tall grasses strategically placed to swallow errant shots. Adding to the challenge are the often tight pine tree-lined fairways and the ever-present wind.

Voted the eighth-best course in the country by Golf Digest a few years back, the front and back nines here are a contrast in style. The front nine with its tree-lined fairways — the majority of which are doglegs — is all about keeping it in the fairway and avoiding the rough. The back nine is more open with the 442-yard 10th, and a dogleg right that provides the first view of the dunes. The sand continues through the 14th hole and culminates with a Trent Jones trademark "crescendo finish" as a series of bunkers splits the fairway on the par-five, 550-yard finish.

Much like the remote classic links courses in Scotland, Tiger Beach Golf Links takes a bit of effort to find. Situated about a 90- minute drive from either Yantai in the north or Qingdao in the south, this amazing 18-hole layout along an isolated portion of the Yellow Sea coastline is testament to one man’s love of links.

Opened in 2000 by Beta Soong, Tiger Beach is a faithful recreation, or perhaps tribute, to the most famous links found in the British Isles. In his first course design, the Taiwanese industrialist took three years to perfect his masterpiece, designing, and subsequently rebuilding, until he got it right: all the links characteristics in deep-pot bunkers, prominent mounding, treacherous rough and knee-high fescue grasses blowing in the ever-prevalent wind.

Soong, who also owns Shanghai Silport, was so serious about Tiger Beach’s authenticity that he even considered importing the prickly gorse found on Scottish courses until realizing the foreign plant could be an environmental disaster for the area.

Unusual features of the course, at least for a links, are the presence of a couple of lakes used for irrigation purposes, and Bent grass greens of considerable undulation. Esthetics include a replica of St. Andrews’ famed Swilken Bridge on the 13th hole and a herd of goats wandering the course as unofficial green-keepers. The club is also the only sister course in the world to the famed Carnoustie Links, "discovered" accidently by a group of businessmen from Scotland’s Angus County while on a trade mission in China.

At a time when China is quickly spawning a continuous procession of great new golf courses, Chung Shan Hot Spring tends to be forgotten. While the newcomers may boast over-the-top clubhouses and difficult layouts, they will never have the pedigree of this Zhuhai-area facility, located about 45 minutes from the Zhuhai ferry pier.

Opened in 1984, it was the first club on the Chinese mainland in the modern era. The club’s initial 18 holes were designed by the legendary Arnold Palmer, and the seven-time Major winner set the standard for the more than 400 golf clubs now operating in China. With an army of about 2,000 laborers at his disposal, "the King" created a classic layout with tight tree-lined fairways, blind shots and difficult traps.

In 1993, the club opened its Nicklaus Course, designed by the equally-legendary Jack Nicklaus. This gives Chung Shan a one-two punch that few clubs can match. Unlike the par-71 Palmer Course with its Bent grass greens, the Golden Bear’s layout is wide open with abundant water, massive waste bunkers and slick Bermuda grass greens. It is also about 500 yards longer, at 6,968 yards.

While the club is fairly low profile nowadays and its membership has long ago been sold out, Chung Shan has played a leading role in the development of golf in the country through its hosting of various national amateur championships as well as the 1992 Queen Sirikit Cup won by South Korea. To its credit, the club also produced current China No. 1 Liang Wenchong, who came out of its caddie ranks.