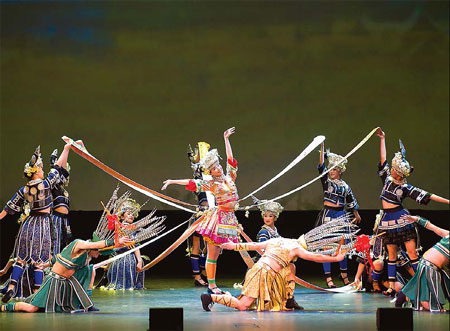 Dancers from Guizhou Folk Dance and Song Theater perform folk dance of Guizhou province in Melbourne, Australia, recently before an audience of about 2,000 people. Photo by Bai Xue / Xinhua
China should encourage its companies to help promote its rich culture worldwide, lawmakers and political advisers said.

Yu Pei, a researcher with the Chinese Academy of Social Sciences, said at the ongoing NPC session that China should aim to become a global cultural powerhouse.

Yu, an NPC deputy from Tianjin, said China has a wealth of cultural resources and heritage, but compared with its foreign trade surplus, its overseas cultural exchange is running a serious "deficit".

"That is because we haven’t found the right way to promote our splendid culture abroad," Yu said.

His remarks have put the often-discussed topic of effectively promoting Chinese culture abroad once again in the spotlight, compelling cultural experts and leaders in the arts to reflect on their promotional methods.

So far, most performances of Chinese artists abroad are funded by the Ministry of Culture or governments at various levels. No admission is charged and audiences are invited.

The Wind of Colorful Guizhou Culture and Arts Company, a folk dance group from Southwest China’s Guizhou province, is such an example.

Funded by the Guizhou provincial government, the company has taken its shows around the world in the past few years.

Its sales manager Jiang Wenjun, who is also an NPC deputy, said the company’s best-known show was well received overseas and became a "calling card" for Guizhou. He said each overseas trip cost about 5 million yuan ($794,000). The company came up with the idea of charging admission for their shows, but the box office is not their biggest concern now, for they "have too many things to consider" before taking that step.

Although the Chinese government has invested heavily in promoting the spread of Chinese culture overseas, some art groups do not agree with the funding behavior. They say the best way to successfully introduce China’s cultural products into mainstream Western society is through commercial channels.

"Ticket sales will reflect whether a show that is popular in China is loved in other countries," said Chen Zhilin, director of the Sichuan Opera Troupe.

"The market will help us decide what kind of cultural products we need to introduce overseas."

Chen, an NPC deputy from Southwest China’s Sichuan province and also vice-chairman of the Sichuan Federation of Literary and Art Circles, said China should customize its cultural exports to maintain its artistic standards and meet the tastes of the target audience.

Last year, Chen’s troupe performed more than 40 Sichuan operas in Paris, and tickets quickly sold out each time, so the company not only successfully promoted Chinese culture abroad, but also profited from it.

Chen said the traditional form of Chinese opera is difficult for foreign audiences to understand, so they invited French directors and stage designers to make new interpretations of Sichuan opera.

"We tell stories about China, but the story structure and the visual effects onstage have been adjusted to conform to the tastes of Western audiences," Chen said. "Still, all the remakes are based on traditional Chinese cultural elements."

Chen said China have to export its culture in a way that is accepted by foreigners, otherwise it might see the popularity of some shows plummet in foreign countries.

Huang Huilin, director of the Academy for International Communication of Chinese Culture with Beijing Normal University, said each year her academy invites university students from other countries to Beijing through a one-month exchange program.

"Most of them are coming to China for the first time. They are fascinated with the diversity of Chinese culture and are very willing to explore various aspects of Beijing and China," Huang said. "They will share their experiences in China with others after returning home, and this is also a good way to promote Chinese culture."

Previous news: Team Sanya in Auckland, want to make a stand on any of the next 5 races

Next news: Hainan to build world’s largest orchid planting base in Haikou