Visiting Wenbi Peak, one of the Eight Views of Anding, Haikou 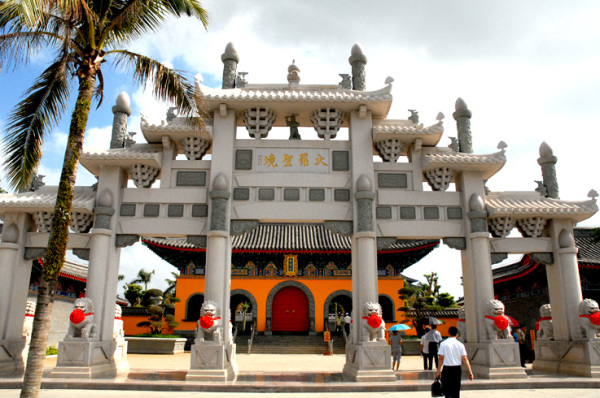 Wenbi Peak also called Wenhao Peak, is located in the middle part of Anding County of Hainan
Wenbi Peak, also called Wenhao Peak, is located in the middle part of Anding County of Hainan Province. It is rising abruptly out of the ground, elegant and beautiful. Wenbi Peak is regarded as one of the Eight Views of Anding.
There is an old story about the Wenbi Peak. Long ago, one immortal shouldered two loads of soil to the Peach Garden of the Goddess. When he passed Anding, he was attracted by the picturesque scenery, and laid down to have a rest. He was drinking while appreciating the scene. Unconciouly, he was drunk and fell into sleep. After a long time of sleeping, the immortal turned into stone, and the two loads turned into mountains, one of which is the Wenbi Peak.
On Wenbi Peak, there are many relics of the immortal, namely, the Xianren Cave.Footprint of the Immortal, Palm of the Immortal, Xianren Rock and Niangzi Cave.
On the east and west side of the Wenbi Peak, the mountains are composed of igneous rocks, with a history of one million years. However, the Wenbi Peak is composed of the hydrogenic rocks, with a history of hundred of million years. This is rare in geography.
Wenbi Peak is the symbol of civilization in Hainan. In history, there were many personnels in the area around Wenbi Peak. And in the Southern Song Dynasty , Wenbi Peak is the birthplace of the Taoism in south China.
Location: Anding County, Haikou City
Admission fee: CNY 40
Opening hours: 8:00 a.m. – 6:30 p.m.
Transportation: you can take bus No. 14, 37, 41 to Haikou East Bus Station, and change another bus to Anding, then hire a pecicab to Wenbi Peak
SOURCE: foreignercn.com & wenbifeng.com
Editorial Message
This site contains materials from other clearly stated media sources for the purpose of discussion stimulation and content enrichment among our members only.
whatsonsanya.com does not necessarily endorse their views or the accuracy of their content. For copyright infringement issues please contact editor@whatsonsanya.com