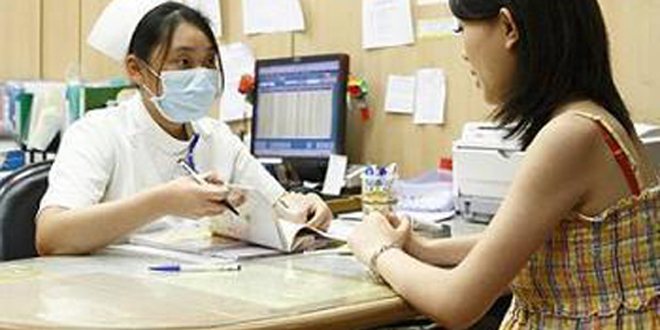 Growing numbers of couples in the country have not undergone premarital health checks since the State Council said the practice was no longer mandatory, resulting in possible health risks to their children.
In Hainan Province, the premarital check-up rate has plummeted from about 80 percent in 2003 to as low as 0.8 percent at one stage.

In Hainan, the check-up rate increased to 24 percent in 2009 only after strengthened promotional efforts by the local government, according to China News Service (CNS) Sunday.

A doctor surnamed Han from a health institute in Haikou, Hainan, was quoted by hinews.com Sunday as saying that the lack of premarital check-ups could result in huge consequences for families, including babies being born with defects or sexually transmitted diseases.

Dong Hengyi, an eight-year-old boy, was born with thalassemia, an inherited blood disease that causes anemia.

He has relied on manual blood transfusions since he was born, leaving his parents having to foot thousands of yuan in medical bills each month, according to the report.

The parents of Dong had not undergone premarital medical checks, the report said.

The national premarital check-up rates have decreased significantly from 99 percent to about five percent with minor fluctuations among different cities in 2010 after the new regulation was implemented, the Sichuan Daily reported earlier.

In Beijing, the check-up rate is only about seven percent. Eight districts in Chongqing that provided free check-ups recorded a rate of just four percent in 2009.

Liu Jue, a nurse at the 301 Military Hospital in Beijing, told the Global Times Sunday that many families were unaware of the check-ups, especially economically disadvantaged people from the countryside who knew little about its importance.

"Premarital examinations can detect infections in the parents' bodies and also some hereditary diseases that could be passed on to the baby. However, many couples, for various reasons, do not do the check-ups," she said.

She pointed out that some couples from poor or illiterate regions did not even know about pregnancy check-ups and gave birth without any form of preparation.

Zheng Lixin, a researcher at the Family Planning Science and Technology Research Institute in Guangdong Province, said many couples regard premarital check-ups in the same way as physical examinations.

"Some couples reject premarital check-ups as they could affect spousal relationships if any problems were discovered," Zheng said.
SOURCE: Global Times
Editorial Message
This site contains materials from other clearly stated media sources for the purpose of discussion stimulation and content enrichment among our members only.
whatsonsanya.com does not necessarily endorse their views or the accuracy of their content. For copyright infringement issues please contact editor@whatsonsanya.com