Visit former residence of the Song family in Wengchang, Hainan 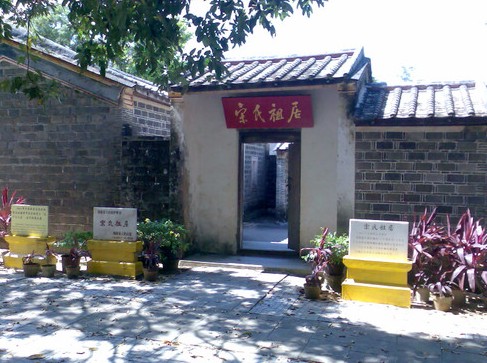 Former Residence of the Songs
Former Residence of the Songs is located 30 kilometers away to Wenchang City of Hainan Province. It is the former residence of the Song family.
On the lintel of the door, a stele hanging there, which is inscribed by Deng Xiaoping. In the house, there are the things which were used by Song Qingling’s parents and grandparents, including the plough, harrow, and barrel. On the wall hang the photos of Song’s parents and grandparents, family tree and some introductions of the whole family.
The family name of the Songs was Han. The ancestors of the Hans were pesants, living a poor life. In 1875, Han Jiaozhun, Song Qingling’s fathere, and his brother Han Zhengzhun went to America with his uncle. And then he were adopted by his uncle and changed his name into Song Jiashu. His sons and daughters were all named Song, and became personnels in Chinese history, especially the second daughter Song Qingling, who can be regarded as the woman hero.
The house was built by Song’s grandgrandfather during the reign of Emperor Jiaqing of the Qing Dynasty. It is composed by two large rooms, two wing-rooms, two gateways and the courtyard, covering an area of more than 1500 square meters.
On the northwest of the house, there is the exhibition hall which is to comemorate Song Qingling. In the hall, there are the photos, pictures and the paintings about the youth life of Song Qingling. All the exhibits reproduce the brilliant life of Song Qingling.
Location: Wencheng Town, Wenchang City, Hainan Province
Admission fee: RMB 15
Opening hours: 8:00 a.m. – 6:00 p.m.
Transportation: you can take a taxi from Wencheng Town to the Former Residence of the Songs, which will cost you 30 to 40 yuan.
SOURCE: 898.travel
Editorial Message
This site contains materials from other clearly stated media sources for the purpose of discussion stimulation and content enrichment among our members only.
whatsonsanya.com does not necessarily endorse their views or the accuracy of their content. For copyright infringement issues please contact editor@whatsonsanya.com

Next news: 8 killed, 7 injured in car accident on Shenyang-Haikou expressway